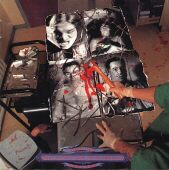 Between going from a downright nasty grindcore achievement with “Symphonies of Sickness” to a more clean-cut sound on “Heartwork”, Carcass released this less-acclaimed gem. “Necroticsm – Descanting The Insalubrious” is a transition from hell to the world above, while still keeping it raw but showing fans what was in store for the future.

“Necroticsm” didn’t completely defy what the band had done before, but surly some fans were disappointed. The production isn’t as muddy, and everything is a bit more decipherable. It’s of the same ilk as “Heartwork”, but a lot darker. It’s very melodic, mostly due to the fact that the band brought in Michael Amott. The interplay between Bill Steer and Amott is amazing. Great rhythms and lead, and both guitarists do an excellent job sharing duties. This has to be one of the very best guitar duos in the history of metal, hands down. Drummer Ken Owen does a great job of keeping the band together. He plays pretty fast and somewhat technical, but doesn’t quite make it up to the highest of players. He’s definitely a worthy addition to the band though, and he does an excellent job. Bass/Vocalist Jeff Walker does an exceptional job. His vocals are a cross of death and black metal. Usually I can tell if its Jeff Walker or not, which is good that he doesn’t sound like every other vocalist under the sun. Overall the musicianship on this album is terrific and it is much more noticeable then on the bands last release.

“Necroticsm” overall is a good record, but sometimes lacks the ability to keep the listener interested in the album for the entire duration. The ideas are there but everybody in the band is having a little bit of trouble manifesting it. All these problems are solved on the bands next album, “Heartwork”, though.

Bottom Line: Not the highlight of the bands career, but its definitely worth owning.