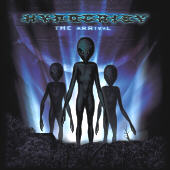 So, they finally arrived. After going through the fourth dimension and abductions we finally get a chance to witness their arrival. And let me tell you the pleasure is all mine; three aliens have landed and are ready to harass your body and torment your soul.

There are bands in this world that with every release deliver quality music and never disappoint their fans. For me, a prime example is Hypocrisy. After the more or less controversial "Catch 22", Peter and Company revisit their roots and pound our brains with a promising mix of old school Hypocrisy and a modern edge.

Employing musical styles from as far back into their discography as "The Fourth Dimension" and "Abducted", fast, mid-tempo and even doom like songs can be found on "The Arrival". But while their latest opus is not the most original piece of music they've done, this isn't a case of a band chasing their own tail either. Even though tracks like 'Eraser' or 'The Abyss' could easily fit the musical concept of "The Fourth Dimension", the songwriting and production sets them a few levels higher than their predecessors. In fact the most noticeable aspects of "The Arrival" are the arrangements and production. Theoretically simple songs are full of background guitar licks, subtle solos, a tight rhythm section and a variety of Peter's screams and growls.

Maybe I'm just another old school fan but Hypocrisy proves time and time again that death metal can kick ass while being heavy and melodic without going into blast beats and competing to be the fastest band around. In a world where good songwriting is as scarce as alien abductions, we need the three named Hypocrisy to probe our asses and remind us how music should be done in the first place.