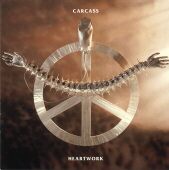 And Bill Steer and Ken Owen said, “Let there be Carcass!” Ok, maybe it didn’t exactly happen like that, but it sure as hell should have. I don’t think you can really deny the greatness of Carcass. Sure you can dislike the band, but come on... they’re great! “Heartwork” is a legendary album, and Carcass is a standout act. It’s a continuing step in the bands evolution, while they further distance themselves from their grind roots.

So the band decided to add Michael Amott to the lineup after “Symphonies of Sickness”. Then, the band released “Necroticsm: Descanting the Insalubrious”. Amott’s guitar playing gave the band a new flavor, and “Necroticsm” was a pretty darn good album. But then “Heartwork” came around, and it whooped the entire scenes ass.

With pseudo-grind rhythms hinting at their early days and melodic rock/bluesy guitar to accompany it, this is one amazing album. Bill Steer and Michael Amott are one of the very best guitar duos of their day, stressing a high amount of talent while not sacrificing anything to show of a technical skill ego. Their often technical leads, solos, etc. are tasteful, not obnoxious. Drummer Ken Owen is one of the best single-foot drummers of the scene. Again, tasteful is the word here. Not in the mindset of fitting into any certain category, he doesn’t feel the need to do constant double bass nor constantly perform blast beats. Then there is Jeff Walker on vocals. Definitely a great thing – his death vocals with a black metal rasp approach make him a few different things. He’s a great addition to the band and a unique vocalist. One of the best line-ups of the early 1990’s, not only could these guys play, they could write.

Bottom Line: If you’re a fan of melodic metal of any kind, this is nearly mandatory. Simply put, this album is amazing.