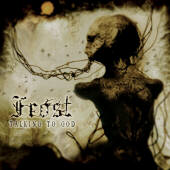 Frost is one of those strange, but decent projects mostly fathered by one man. In this case it's Anaal Nathrakh's front man Migg. With the help of two great vocalists, The Fog and Shid. Add to this the enchanting presence brought by the feminine touch of Lady Abigail Winter on viola and vocals.

Talking to God is the band's second output and since we owe the words, music, artwork and production to Migg, it shall be said in all fairness that this is his brainchild. Talking to God is a modern day black opus showing a melodic sense into its sinister ambiance. The words are purely black and mystical. The vocals are a constant duel of a duo made of that typical black style versus a more cybernetic and futuristic one, both forming a demonic set of characters. Female parts are scarce but well appreciated on the song 'Filthy Black Shit' and incorporated into the choir on the closing title track. The trump card arrives with 'Subliminal Hell'. This masterpiece alone is worth the price of the CD, let me tell you. The pace is mid-range and after a mysterious intro, the intensity picks up right until you get the riffs that would make you crawl in idolization! To make this marvel even greater, viola parts are being used to add more beauty.

Talking to God is a hell of a good album and the production is excellent. The compositions are intelligently written, heavy, mystical while remaining simple and accessible. I found the rhythm parts at times a bit repetitive but some of you might like it this way mostly if you are into old school. For the new school fanatics, you'll be more than pleased by the great atmosphere that Frost is bringing.