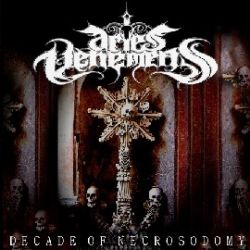 Poland has been one hotspot for metal for a while, especially for some intensely brutal and unique death metal.  I have heard many bands from the former soviet block nation that do death metal better than the Swedish masters who perfected its nastiness as they seem to put a even harsher tilt on it.  Enter for your approval, not to mention bleeding ears… Aries Vehemens.

Calling their style Necrosodomic Death Metal, this four member band from Southern Poland plays some no nonsense death metal that is as malicious as it gets.  Simple and without any fluff to it, this band is set to burrow into your cranium and be a sadistic earwig for the next few months. The whole album is a tidal wave of sonic viciousness, almost like a runaway buzzsaw up against hardened steel with helpless people stuck between the two. The album as a whole is nothing new to DM, but it is the intensity that they band delivers each song that raises the album pat mediocre to more of a notable one. Stand out tracks are 'Heavy Cross' and the bloody imagery of 'Dead Vagina Obsession'.

There are recording glitches and some tracks use too much of a single four chord passages over and over again, but still it holds it own in the glut of death metal out there.  I say it is worth having in your collection… and then some.  Truly, well done slab of venomous death metal.  WELL DONE POLAND!