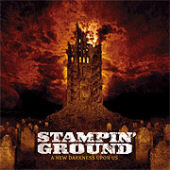 Type: Full-Length
Release Date: October 27th, 2003
Label: Century Media Records
Genre: Groove, Hardcore, Thrash
1 A New Darkness Upon Us - Intro
2 Don't Need A Reason To Hate
3 Behind The Light
4 Killer Of Society
5 Dead From The Neck Up
6 The Cage
7 Bear The Scars
8 Betrayal Has A Face
9 Pain Is Weakness (Leaving The Body)
10 Unmarked Grave
11 Ashes To Scatter
12 Mantra Of A Dying World - Outro
MetalBite on YouTube

I remember the hype surrounding this album before it was released, it was touted as being the release that would usher in the renaissance of thrash metal. It was going to be the album that was going to go up there with the likes of "Reign in Blood", "Darkness Descends" (hence the title probably) and "Ride the Lightning". When it was released and I finally got to hear it, I wasn't thinking of any of those classics, no, all that this brought to my mind was the old Public Enemy classic "Don't Believe the Hype", and I'm not talking music here.

To be fair to them, the second track 'Don't Need a Reason to Hate' is a decent thrash metal banger with some pretty raucous riffing and neat percussive work, but after this one the party's mostly over. As the band switches over to their style of metalcore with groove metal influences the tempo takes a nose dive too, with the band working through a set of coma-inducing almost-songs that do nothing but go from mid-tempo yawn fests to breakdown and back again. Perhaps that this would have done way better in the period of 96 - 99 but then again, bands like Pissing Razors, Torque and Hostility have done this way more convincing. In 'Bear the Scars' the band pick up the pace again but even then the song peters out into another mid tempo dirge. Throughout I hear NYHC influences popping up in the music and the vocals, bringing to mind bands like Madball or 25 ta Life, except they do it better than Stampin' Ground. And speaking of the vocals: they are nothing out of the ordinary either, just your generic metalcore bark that recalls vocalists in the line of Karl from Earth Crisis with some hints of Agnostic Front's Roger Miret in execution. There are some occasional faster parts and thrash riffs here and there but they don't change the fact that this album is a pretty generic and boring metalcore record. This fact is not helped either by the squeaky clean, sterile production job.

It was probably very unfortunate for the band that in the previous years we had thrash bands that had their shit together way better than Stampin' Ground, just think of stuff like Darkane's "Rusted Angel", Hypnosia's "Extreme Hatred" or Dead Head's "Kill Division". Even oldies like Sodom and Agent Steel dropped way more memorable stuff than this in the form of "Code Red" and "Omega Conspiracy". Compared to the releases mentioned, A New Darkness upon Us is just bland and boring and utterly forgettable at that. Even if you look at it as a strict metalcore release this still sucks big fat donkey balls. Bands like Belgium's Liar, Congress and Regression did this waaaay better.

Just leave this for what it is and better check out Stampin' Ground's An Expression of Repressed Violence, where they offer up ballsy metalcore but without the pretension of being a thrash metal band. Suits them a lot better.

Stampin' Ground is your basic riff-based hardcore metal band and what is offered on "A New Darkness Upon Us" is nothing short of predictable and lackluster.

The vocals don't stray from the usual macho man bark and become increasingly annoying with each song. This is throw down pit music after all and the rest of the instruments follow accordingly. Andy Sneap's production is crystal clear which shouldn't be a big surprise to anyone. However, just because it sounds good does not mean that it is anything special. I am normally someone who can deal with over-saturation in metal to a certain extent, but as far as hardcore metal goes, I am slightly less tolerant.

If you are a hardcore metal fan, then I am sure you will dig "A New Darkness Upon Us." Stampin' Ground has the sound of a good live band, but on record, they fall short of any kind of glory. As it goes on, the monotony increases until it is almost unbearable. The songs themselves lack any individuality but for the genre I expected that. "A New Darkness Upon Us" may sound good but it doesn't contain anything that hasn't been done already. I'm not impressed.