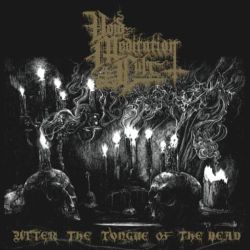 Type: Full-Length
Release Date: October 31st, 2016
Label: Hells Headbangers Records
Genre: Black
1 Blessed By Lycosidae (Opening Mass)
2 Utter The Tongue Of The Dead
3 The Antichrist Prevails
4 At The Door Of An Infernal Realm
5 Defile And Devour
6 Alms For The Eyeless Idol
7 The Brimstone Hail
8 Mould And Blood
9 The Shores Of Eternal Night
10 Goddess Of The Waking Death
MetalBite on YouTube

I'm sure at some point in our lives we have been warned about provoking the elderly man or woman next door due to rumors of him/her being a witch or something vile in nature. However, because we are young, dumb, inquisitive, and extremely eager to discover the next best thing as our hormones spiral out of control we ignore all warnings and foolishly venture forth with our mischievous deed. Then, one late evening while our parents are away, we hear a knock on our door. We rush downstairs with much joy to answer, only to discover with horror radiating from our eyes: it's not the pizza delivery we all expected. Need I say more?

Void Meditation Cult's Utter the Tongue of the Dead possesses that odious presence, which enthralls and engages the listener. This is one of the most demonic albums I have ever heard. The artwork is simplistic, but it drives across the point of what is to be expected. Utter The Tongue of the Dead is catchy, groovy, gloomy and mysterious. Void Meditation Cult paces the music on the album conscientiously and gracefully. Nothing on here sounds rushed or hastily implemented just for the sake of doing so. No, this is 35-minutes of baleful, doomy, lo-fi black metal. The vocals sound like a prowling animal calculating, pondering and predatorily planning the attack on its next prey. The vocalist sounds similar to when I first attempted death metal growls after hearing them. For me, it came out as a tiresome painful grunt which I got better doing after much practice. The difference here is that the vocalist is able to maintain a deep gurgling grunt throughout the album. There are also segments in which the vocalist (under the pseudonym of "Desolate Defiler") uses extremely low-pitched gasping whisper-like chants. The vocals invoke an atmosphere of utter dread, and the lyrics are no exception on this malevolent beast of a release. The lyrics are definitely some of the most intelligent and cryptic lines of blasphemy I have ever read on an album. Only a handful of bands have ever challenged me lyrically in terms of meaning and structure; bands like Impetuous Ritual and Inquisition fall along that line. The demonic lyrics on Utter the Tongue of The Dead are beautifully crafted, hence I may quote one of my favorite excerpts taken from 'Alms for the Eyeless Idol';

"O', glorious emissary of the devil
Beneath your dreadful wings
No seed of Christ shall thrive
Before your rancid sight
The flock shall wither as rotting meat"

The drumming and guitars are done exceptionally well. They both aid each other in magnifying the demonic atmosphere being fostered. The guitars are very audible, while the drums are very lo-fi in the mix. I hail this approach taken to have the guitars guide the listener as the drums conjure a ritualistic state of being. The synths and keyboards utilized are a welcome addition to the atmosphere. They provide much ambiance to an already somber and wretched album overtone. The bass is somewhat audible to a certain degree when the guitars are played at lower levels on tracks such as 'Defile and Devour' and 'At The Door of an Infernal Realm'. Closing the album is the track 'Goddess of the Waking Dead' (how sick is that for a song title?) which combines all of my favorite elements and highlights throughout the course of the album: the lo-fi drumming, sudden shrieking guitars, synths along with the whispering and grunting vocals of "Desolate Defiler".