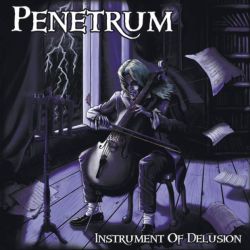 I'm not fond of melodic death metal. Strangely enough, I see it as a watered-down, radio friendly form of the source genre. My patience with this subgenre is very thin, therefore making it almost impossible to earn my attention, keep it, and leave me with a good impression. That being said, Penetrum has somewhat clawed at my interest and succeeded at absorbing it within the music of their 2018 release, Instrument of Delusion. Don't let the album's somber artwork misled you into thinking Instrument of Delusion is a melancholic album. Absolutely not! This isn't the kind of melodic death metal that sounds all whiny and mournful; it's quite the opposite and even sounds cheerful on some tracks.

Instrument of Delusion places a heavy emphasis on catchy melodies, guitar riffs and leads, all the while creating a feeling of blackened death metal via the vocals being presented. Some elements of folk metal are also introduced on the album, especially on the track "Blazing Souls." This track features fast-paced thrash metal-style drumming and furious guitar leads, all ridden triumphantly by the folky style of singing that appears more towards the middle of the track. The song is very fast and even increases in intensity (momentum-wise) towards the end, via the speed metal style of drumming. Yes, I'm thrilled to say that Instrument of Delusion has much variety (thus avoiding boredom and repetition) that is handled with care in terms of implementation, thus preventing the music from turning into a clumsy disaster of notes. The speed that "Blazing Souls" possessed is toned down a bit on the following track "Crimson Forest;" indeed it's flow is still relatively fast, but the little loss in momentum is compensated for with very strong guitar work on the leads and the solo. Towards the end of "Crimson Forest," Penetrum returns to the quickening pace of "Blazing Souls" by adding scorching "first-wave" black metal drumming with furious "second-wave" wave black metal tremolo picking.

Now, to quench the listener's thirst after that blazing sprint through the forest, we see Penetrum slow down quite a bit on the track "Blood Taste's Like Lead." Nikita Volkov takes a break from the harsh vocals for a short moment and soothes the listener's ear with delicate clean singing. The hoarse screaming only reappears on the chorus of the song and far towards the end of the track. The guitars also take a step back into a low tempo supporting role and allow Volkov to execute his task proficiently. The clean singing on "Blood Tastes Like Lead" is not bad at all, nor is it perfect; it’s just right and suits the production well.

I encountered one blemish which appeared on the track "Amok." On this track, the production at the very beginning of the song sounded very choppy and faded, as though it had been recorded and printed on a poor quality of cassette reel. Thankfully, this doesn't persist and only lasts for a very short period of time. Overall, the production is sturdy and does not in any way come across as being too clean. It seems to have some likeness in terms of black metal, which is unusual in melodic death metal; however, it works out well and positively contributes to the way Penetrum plays their its of music.

"Caprice of Delusion" is an instrumental track that slowly builds into a blizzard of barraging guitar melodies, leads and riffs. The guitars take full command over this six-minute epic; it's a track that constantly changes its melody and pace while distributing memorable bits of melody. It brings the album to a decent end, and although clocking at 45-minutes long, the listener's sense of time is lost throughout the entirety of the album. Because of this, I can say that Penetrum's 2018 debut offering is truly an instrument of delusion.