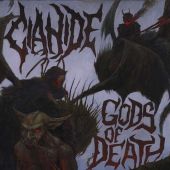 Cianide is a hometown legend around my parts. I’ve seen these guys over the years more times than I can remember and have followed various other projects of members past and present. It’s hard to believe it’s been 20-years already since my dear departed friend John McNicholas gave me a Funeral demo and we played it incessantly in cars, bedrooms, basements, parking lots, you name it. I’ll bet the people at the local Jewel hated us for pulling up with this blasting on a daily basis, but I’m sure they’ve forgotten all about us. In any case, in regards to the death/doom genre, Cianide dispels the myth that it can’t be done and carry an entire record without boring or stultifying you.

The early 90’s sound is ever present here, which might otherwise appear dated and unable to advance, but since this sound never really had a chance to be raped or commercialized it can garner a brief pass. The low crunching of a drop-tuned ride through chaotic structure without too much attention to perfection is what makes Gods of Death something worth hearing. The murky feel to the music is always the charm of Cianide and this release is no exception. It follows the slightly slower, grainy efforts of Hell’s Rebirth by relying on attentive tempestuousness as opposed to mindless shredding. “Dead and Rotting” is simply an ugly track filled with musical visuals of disgustingly rancid decay from any and all facets; when music can provide such imaginative elements to accompany the tone you have something there. It doesn’t always work, but it can set a design quite nicely. There’s nothing sincerely attractive in death metal music; one listen to anything Death or Cardiac Arrest solidifies that sentiment, and usually the less attractive music is bodes better for the band. Cianide has always stayed true to the concept without falling through the cracks of commercialism and insipidity. “Contained and Controlled” is the shredder’s delight, pounding riffs and drum beats into your cranium like a rusty railroad spike. This is one of my favorite tracks on the album because it organizes discord to a discernible degree and sets the stage for some serious thrashing around the local supermarket aisles…ah, well, that was a long time ago, but it can still be done!

Providing a relevant collective some six years after the last full-length, Cianide demolishes the door between death and doom metal the likes of which is rarely done well. “Idolator” is the sort of track that used to drive metal crowds insane in clubs like Medusa’s or the Cubby Bear back in the day, and I definitely see a similar ring of flailing arms and bodies if this song makes the live Cianide set. Bassist/singer Mike Perun’s vocals are the clear guttural efforts that make the music both decipherable and enjoyable; the music is of high caliber and while not on the technical side of proficiency, there’s nothing left to want for if this type of death metal is your particular interest. One listen to “The One True Death” and you’ll understand the motivation and certainly hear elements of Celtic Frost and Hellhammer throughout.

To be honest, I put off reviewing this or reading anything about it for a few weeks because I wanted to hear it with fresh ears since this band is part of my personal history in a large form, and while nothing will ever compare to 1997’s Death, Doom and Destruction Cianide proves itself a long-standing contender for the legend status in any underground conversation.