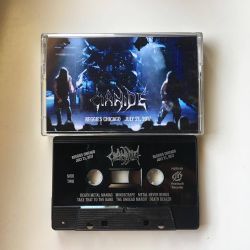 Chicago legends Cianide have a long and lasting lineage attached to them. Around these Midwestern parts, these guys are far past local legends; they pretty much help define what our city manages to employ in terms of quality metal. When the tagline “Metal Never Bends” is uttered in many a metal show or social gathering of like-minded folk, you can attribute that to the legend that is Cianide. If you are unfamiliar with their back catalog, I strongly urge you to rectify this yesterday – you won't be sorry.

Yes, I'm a fan for many, many years, but I also would never espouse the virtues of any band I didn't feel worthy of such adoration and praise. From the beginning with 1992's The Dying Truth up through the present day, there is nary a blemish on such a storied career. I won't sit here and go through the band's history; I encourage and implore you all to do that if you enjoy quality death metal with doom influences devoid of inane 'bells and whistles' and gimmicks posing as nuance. These guys are, in short, as real a deal as it gets.

So, death metal in its wonderfully chaotic live setting isn't your thing you say? I may submit for your consideration the limited, albeit worthy offering of a live soundboard cassette (yep, they still exist!) of the band's show at Reggie's Rock House here in Chicago on July 21, 2017 simply titled Reggie's Chicago – July 21, 2017 on Headsplit Records. You are (mis)treated to 12 tracks of homegrown death/doom, the likes of which can't be matched around these parts. If you have never had the sick pleasure of witnessing this band live (or even hearing their studio efforts), you are not only missing out, you are wasting precious time. In the nearly 50-minutes of stage time herein, you hear a solid, unrelenting foray into the cellars of Sabbath-like death metal from whence many a 'doomy' dirge has been disseminated. This trio manages to create a definitive wall of sound that can't possibly be denied. What you will find here on this live offering is a full-set of fast-to-slower, gut-squeezing death with vocals that don't follow the typical blueprint; the gruff vocal is a throaty persistence that both utilizes the tone to near perfection and enunciates well so that the gamut of degradation and scorn can be taken in accordingly.

While there is a small amount of production-polish associated with bringing this live show to a logical release standard, the intensity and brutality of tracks like “Desecration Storm” or “Death Dealer” are still felt in the core of your stomach. Further, the 'polish' doesn't take away from the music itself: a solid mesh of airy thickness and clarity, something very tough to capture on a death metal live release without subtracting or adding too much of one or another. Everything here is what you might expect to see and hear when you see Cianide live: a galloping jaunt through an air of Chicago metal in its purest, unadulterated form. There isn't any need for technical perfection or overly-anal attention to minuscule detail; the band never puts out a half-assed product, which is why their catalog is as solid and respected as it is. This little live addition, limited or not, is just another notch in the aged, brilliant bullet belt.

I cannot state just how important a band like Cianide was and is to my personal metal education growing up on the now-plague-like streets of Chicago; they provided a strong soundtrack to my youth that has managed to carry over into my middle-age, most likely ending up in my damaged memory bank when I take my last breaths on this cursed plane. Yes, the local connection is a worthy notation for someone in my position, but I could write novels listing the bands from these streets that are long forgotten to time. Cianide comes around once a lifetime; they are as important to us here as Incantation is to Johnstown or Possessed to San Francisco. The local pride is strong, of course, but the music is exemplary and resonating – no amount of personal geography can embellish that point.