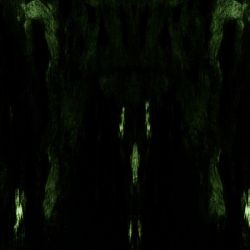 Imagine awakening in the middle of the Pacific Ocean on a cruise ship which sails steadily on the calm midnight ocean. Now imagine a sudden shift in the atmosphere as a category 4 hurricane rapidly builds precisely at the ship's geographic location. Goliath-like waves begin to lash the ship from every imaginable angle resulting in a loss of control and total panic. Unholy Congregation of Hypocritical Ambivalence is an album which embodies that type of hopelessness and fear in such a situation. The unholy howling and shivering shrieks of the vocalist, the ever so sudden swing in rhythm, the pulsating drumming, frantic guitars, the tremor like bass and the mysterious lyrics all contribute to something much greater than just being another death metal album.

The sound of every instrument is beautifully woven to invoke a sense of utter fright in the listener. The album is absolutely relentless in its 48-minute length. It is a somewhat long album; however, it commands the attention of the listener and succeeds at maintaining that attention. With songs like 'Verboten Genesis', 'Despair', 'Venality in Worship' and my favorite, 'Inservitude of Asynchronous Duality', Impetuous Ritual manages to drown you in darkness. The atmosphere is overwhelming to the point where a sense of time is lost as you sink deeper beyond the bed of this ocean of bleakness. Within all this chaos of clashing musical instruments, there exists a state of order. The galloping of the kick from the drums combined with the insane amounts of distortion from the guitars, places the listener in a trance-like state of being. There are various tempo shifts on the album which I view as an excellent musical choice. Variation in beats and overall rhythm swallows the listener in a blissful bellow of ambiance. As the album approaches its end you are presented with the track 'Blight' which serves as a summation of the horror witnessed and casts a blackening sky of dread over the listener who partook in this unholy ceremony.

Impetuous Ritual display professionality and deep knowledge about musical composition with this album. Their ability to keep the listener interested for such a long period of time is astounding. Unholy Congregation of Hypocritical Ambivalence is indeed a masterpiece. There has not been a death metal act which has garnered my attention and interest as much as Impetuous Ritual have. I view this band as a prized offering to the death metal world. What Impetuous Ritual delivered with this release is nothing short of breathtaking. Im surprised Impetuous Ritual has managed to remain somewhat obscure with an album like this in their catalogue.