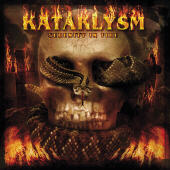 ::   ::
Type: Full-Length
Release Date: 2004
Label: Nuclear Blast
Genre: Death, Melodic
1 The Ambassador Of Pain
2 The Resurrected
3 As I Slither
4 For All Our Sins
5 The Night They Returned
6 Serenity In Fire
7 Blood On The Swans
8 10 Seconde From The End
9 The Tragedy I Preach
10 Under The Bleeding Sun

I have to admit, Kataklysm's universe had passed me by until now. They've always been that band you hear about but never quite get round to hearing. You know, that band which always gives the nagging feeling that they're one of those second-tier acts, plying their trade with something in the way of a manic smile and requisite proficiency, but really... why them? It could be anyone. I mean, why would someone settle for supermarket pizza when there's a takeaway over the road that gives you the option of a Donner Kebab topping? Pass on the processed chicken; you want scrapings from a cow's spine.

So what am I suggesting? Morbid Angel gives you Creutzfeldt-Jakob disease? No. Not really. I think it's more likely I'm suggesting that you don't make stupid assumptions. Yes, Kataklysm are a force to be reckoned with, the proverbial lamb dressed as mutton. Or beef dressed as poultry. Regardless, their combination of striking melody, pulverising groove and the hyperblast has provided an album that really hits the spot.

The lead-off track "Ambassador of Pain" exemplifies their varied approach, hook-laden, crunchy guitar riffing that lurches in a sinister manner, combined with punishing drumming, it's an invigorating opening to the album. "Blood of the Swans" better represents the more ferocious aspect of the sound, erupting out of the speakers with untamed aggression. Anchored with the manic blastbeats of Martin Maurais the song features poisonous vocal outpourings and wave after wave of pulverising riffs.

The guitars show a strong range of influence, the melodies wouldn't sound out of place on a classic NWOSDM album whilst the intros to "For All Our Sins" and "Under The Bleeding Sun" could easily be lifted from a black metal album. This kind of variety within the music gives it a dynamic punch that keeps the record sounding fresh after repeated listens. Added to this is an effective use of dual vocals, a blend of raspy screams and growling; harking back to the Carcass paradigm somewhat it still sounds fresh within this context. Kataklysm's take on the style is more decipherable - something of a blessing - without losing any of the intensity.

Alas, the record is not bereft of a sticking point or two. The volume and triggering of the drums detracts from the overall sound and shades the music slightly. Whilst this is undoubtedly a powerful performance the triggered sound sometimes undermines the brutality of the blastbeats. Such raw aggression shouldn't sound softened like this. It's also somewhat disappointing that the guitars play second fiddle to the drums; the album would certainly have more intensity if there was more volume on the fearsome-if-turned-up-to-11 riffing. Nowhere is this more obvious than in "The Resurrection" with it's awesome opening section, but unfortunately the killer guitar hook is buried somewhere under the hyper blast from hell.

All said and done, the result of Kataklysm's crafting is an album which is aggressive without being monotonous; and catchy without lacking depth. In my estimation that makes this album very strong; which is why, all things considered, these Canadians are worthy of your time and attention, and worthy of it now.