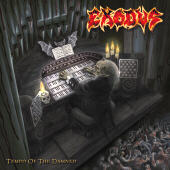 Who would have thought that Exodus would try again? After their first unsuccessful reunion that resulted in the live "Another Lesson in Violence" I never thought I would review a new full-length album from them, but here it is. February 2nd of 2004, on the two-year anniversary date of Paul Baloff's death, Exodus comes back with an album that not only puts them back on the map of thrash metal but places them on top of the genre.

Revitalized, renewed and sobered up, Exodus returns with "Tempo of the Damned" that not only will satisfy every fan of this genre but will also show thousands of bands how metal was meant to be played in the first place. What I mean by that is nothing short of phenomenal guitar work. Sharp as razor, venomous riffs are accompanied by something that's lost in today's scene: solos. And not just any solos, from absolutely insane, blazing ones to dual, mesmerizing harmonics Gary Holt and Rick Hunolt deliver quality almost unheard of in today's market. Top it with the most complete and possessed performance of Steve Souza (who lyrically doesn't shy to spit on anyone and anything in this world) and a sledge hammer solid rhythm section, all iced by Andy Sneap's clear production and you'll end up with one of the most complete thrash albums in the last decade. "Tempo of the Damned" might not appeal to the young crowd of today's death/black scene but anyone with a taste for an intense 55 minutes of excellent musicianship and musical passion will find this album worth every bit of its early buzz.

Is this Exodus' best album? Probably not, but asking them to beat "Bonded by Blood" is like expecting Slayer to beat "Reign in Blood". While technically such a feat is quite possible, those albums were genre-setting, boundary-breaking releases and from that standpoint nothing will ever replace them. "Tempo of the Damned" is not one of them; it is a glorious return of godfathers of thrash in the form of their lives.