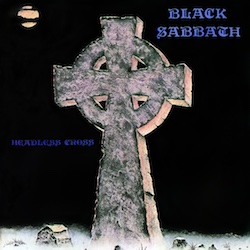 Who invented heavy metal was the question, right? Honestly speaking, I thought I had to answer Cronos, Paul Speckmann or, when push comes to shove, Joey deMaio. However, one day I found the answer. Nevertheless, Headless Cross has absolutely nothing in common with innovation. Tony Iommi and his almost interchangeable companions recorded a very polished, smoothly flowing album with conventionally designed songs. This doesn't sound very exciting? Well, we are coming to the point right now.

Lead singer Tony Martin knows his métier, but he always sounds too clean, too pure and over-emotional. Although his voice has depth and charisma, he is not the natural born metal vocalist and some hideous background vocals ("Devil & Daughter") are even more annoying. In his best moments, Martin sounds like the unforgotten Ronnie James ("When Death Calls"). Well, I am quite sure that Dio's voice would have make pure gold out of this dramatic and intense highlight, but Martin also does a good job here. Too bad that the band is not able to keep the class of "When Death Calls" during the entire playtime. Riffmaster Iommy presents some generic macho-riffs in the title track. They seem to be carefully aligned with the equally generic artwork and push the painfully conservative number on a solid level. Generally speaking, riffmaster cannot be blamed for offering insubstantial songs under the banner that condemns him to constant top performance. "Call of the Wild", for example, has some really strong sections, not only the somewhat desperate chorus. "A Kill in the Spirit World" also scores with a chorus which floats above the profane things, but it does not go hand in hand with its good time rock verses.

The production walks the thin line between "harsh enough" and "too light". Whenever the quintet pulls out all the stops, the album glitters with a profound heaviness, but the rather emotional parts often fail to generate an appropriate pressure. Of course, all instruments are well-balanced, while the voice stands in the spot light. But I guess a band with that status cannot win with a good sound, it can only lose when confronting the audience with badly produced songs. It might be unfair, but even a flawless mix should be nothing but a matter of course for the leading bands of the genre, at least in my humble opinion.

The lyrics also remind me strongly of Dio. "A kiss in the wind whispers murder, murder" is only one of the lines which fit the lyrical approach of the little man with the impressive vocals. And yes, there is maybe a spiritual and musical connection between this album and the glorious Dehumanizer with Dio's gargantuan performance. But more or less each and every song of Dehumanizer hit the bull's eye, while a few tracks remain pretty faceless and predictable on the here presented work. Perhaps heavy metal would be more exciting if Paul Speckmann had invented it. Or Cronos, Donald T. or Maggy Thatcher - I will discuss this with Tony Iommi.