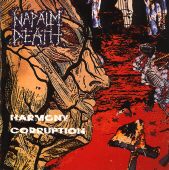 Shockingly, all that I could say when I first heard this album was "wow, what a hell of an album!" If your desire is to know what an ideal grindcore/death metal release or more particularly Napalm Death's best work to date is, this one is it. Some accusations I've heard were that Napalm Death copied the Floridian grindcore/death metal sound of the early 90's. While I say ‘yes there are similarities’, I still feel Harmony Corruption is original as is all of the Napalm Death albums that I've heard. This one has the sickest guitar work, vocals and drums that an album needs in order to coin it as a quality release.

Let's look at the sound and riff structure first off. If you have the metal zone pedal more power to ya because the distortion here is maxed out. If you haven't heard this album, the crunch tone is monumental and contains so much thick fuzz that an amplifier can dish out. Next, the riff writing was not overtly complicated and technical. It is just heavy, fast and insanely intense. Their riffs are composed of bar chord usage; tremolo picked notes and fueled with so much energy. The production makes it a little bit hard to hear everything though, that's the only downside. So the album has a little bit of a "live" sound to it. However, all of the instruments and vocals were well mixed together despite this.

My favorite feature of the album is the drums. Why though? A name that may be long forgotten: Mick Harris. This guy tore it up. It was his next to last effort with the band entirely and his energy is astounding, but yet his drum lines are basic and well fitting. One thing that will pump you up is the blast beats. If you have Live Corruption (1992), you'll know what I mean because you get to see him in action. One of the fastest and most invigorating experiences that can be viewed is him on Live Corruption. His efforts make the songs sound more intense and fast. Mick kept the band intense, brutal and insane which is something they have lacked since his departure. For Mark "Barney" Greenway, their vocalist, this was the first effort with the band and best one to date. For comparison, in my ears, he's similar sounding to Frank Mullen of Suffocation, but seems to have more instances where he's bellowing out his vox. The vocals therefore make things fitting and exciting. Another note here, John Tardy (Obituary) and Glen Benton (Deicide/Vital Remains) are guest backup vocalists for the song "Unfit Earth".

The promise of Harmony Corruption is a great one because this album remains in the grindcore/death metal archives forever for being one of the best records ever made. I don't like the newer lineup and all of the other Napalm Death releases that I've heard haven't been as original and classic grindcore/death metal as this one was. What stood out the most again are the vocals, the guitars, and the drums. I discount other Napalm Death releases and refuse to listen to any of other one of theirs because they're not even close to sounding as good as Harmony Corruption is. Old Napalm Death is dead, long live old Napalm Death!