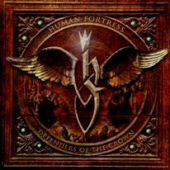 What "Lord of Earth and Heavens Heir" did for Human Fortress in 2001 was establish them as a legitimate heavy power act and a band to keep your finger on in the future. However, what "Lord of Earth and Heavens Heir" did not do for Human Fortress was create a unique enough identity to elevate them above all the other power metal acts trying to strike it lucky by slaying dragons and clashing swords. Fortunately, their latest record "Defenders of the Crown" has seen a steady improvement in musical prowess and Human Fortress' identity.

With "Defenders of the Crown" Human Fortress have taken a step forward in making a name for themselves in the power metal world. The songs are more effectively executed (in both musicianship and production), but more importantly the composition of "Defenders of the Crown" has taken on a broader scope in which will appeal to a larger fan base. Instead of the common mid-pace monotonous power metal bands that litter the globe, Human Fortress have provided ballads, galloping 'punch your through the air' tracks and lastly the trade mark epic songs that inspire courage and hope in mankind (tongue in cheek here).

Fantasy power metal with enough of a hard edge to not be considered too fairy, yet containing just the right amount of emotion to keep it from becoming 'just another album.' Well worth a look.