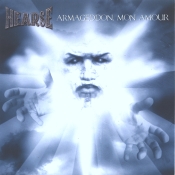 The dilemma isn’t what to say, but where to properly begin singing this album’s praises. It’s been a quarter century since thrash metal debuted with the NWOBHM (New Wave Of British Heavy Metal); fifteen years since death metal took root in Florida; a decade since the Swedish sound caught on; and I’ve heard maybe a handful of albums that were this good. Hearse are the closest thing yet to a perfect combination of the three. Not since Edge of Sanity’s nearly perfect Purgatory Afterglow has any band produced a death metal album where every riff is interesting, every song original, everything a pounding, energizing anthem. Wasn’t this thrash metal’s ultimate goal? Wasn’t this what made such albums as Master of Puppets and Among the Living great? That’s what one hears throughout this album, starting with a monumental opener…

…and that’s their weakest song. The strongest, “In Love and War”, “Tools”, and “Cambodia”, epitomize the thrash metal anthem. I know there are death metal vocals, but they’re pure thrash metal anthems. Judas Priest, in their bygone heyday, would be hard-pressed to approach this music, much less surpass the more impressive songs. Metallica were barely this good. Latecomer Swedish success stories such as In Flames were never close. Most of the music is structured similarly to the old trash metal giants, adopting the familiar verse-chorus-verse approach, but it’s so magnificently crafted that each composition sounds original. I say “most” because there are several forays into older Swedish death metal, particularly later in the album, sounding similar to the better parts of old Entombed and Arch Enemy. “Play without Rules” sounds a lot like the Entombed classic “Sinners Bleed”, mixed with parts of Sigh’s Imaginary Sonicscape — the timing of the keyboard piece is genius, preventing the song from degenerating into near-plagiarism. Taken individually, each could be the theme for thousands of rebellious youth. Taken together, the adrenaline rush they create is a central nervous system overload.

In case I haven’t made this obvious, Hearse have a prominent thrash influence. Anyone can hear it; I draw parallels to everything from Motorhead (Campbell-Würzel era), to Anthrax (circa Among the Living) to the bygone wonder that was Exodus. The death metal influence is most reminiscent of Edge of Sanity’s Purgatory Afterglow, The Haunted’s Made Me Do It, and Arch Enemy’s Stigmata, all of which possessed a strong thrash influence. Then again, this album isn’t a mere repetition of these. This remains original. It’s a sign of remarkable talent, really, that Hearse can begin with such well-established ideas, and present them in an amazing new light.

What sets this apart, then? Why did Hearse succeed so famously, where others merely tried? Here, I am tacky, and answer my own rather stupid question: this album plays as if Hearse studied which elements other bands did right, and then incorporated only those. For example, keyboards are very seldom used, and, even then, only appear to prevent songs from growing monotonous. Johan Liiva only sings clearly on the last couple of songs, and is restricted to a range of notes that he hits flawlessly. Furthermore, the album’s arrangement is clever enough that it flows as a whole entity, from start to finish, rather than feeling like a bunch of disconnected, choppy segments. To put this another way, the clichés that cheapen and bastardize so many other newer metal albums simply aren’t present here. Hearse either tuned them down, or left them out.

Where does that leave us? Well, the end result is a monumental release, bridging the gap between European death metal and old-school thrash metal, nearly perfect in its’ execution. Ten years from now, this will be counted among the new generation of metal greats. The next generation of metal bands will all list this disc among their influences, and, much like today’s bands cover Venom and Motorhead, most of tomorrow’s bands will cover Hearse. This is one for the ages. This is what heavy metal ought to be. Buy this, even if you purchase no other music this year.