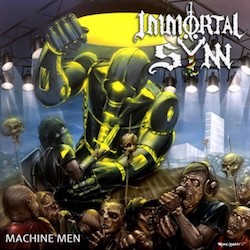 Immortal Sÿnn is listed as a heavy metal band. However, there are elements of power metal and punk metal in their music vocally, in the lyrics and in the choruses. Their sound overall can be termed as heavy traditional power/punk metal. There are even some instances of stoner metal on the album. Machine Men was released in 2017 but I have heard nothing about it during that time. It's non stop guitar worship from the first to the very last. Immortal Sÿnn leaves no tables unturned when it comes to addressing mental enslavement, human identity and social disarray on their debut full length, Machine Men.

The first song off Machine Men being "Liberty Rising" is a banger of a tune. It has a great mid-paced flow, awesome singing in the chorus segments and a furious guitar solo. It is followed by "Metal and Blood" which you can probably guess is a song worshiping heavy metal, like most traditional heavy metal bands do on their albums as they pay homage to the father genre. "Metal and Blood" has a quicker pace than the song preceding it, and like "Liberty Rising" it has a strong vengeful guitar solo. The kind of solo you can stand on a hill and point your sword towards the sky as you decree war. "Dark Abyss" has more of a punk-metal sound that is mixed with a King Diamond style of delivery pattern on the main chorus.

The soloing on Machine Men is commanding like a headmaster or high school principal walking the halls, on a mission to capture any wandering minds. The self-titled track meets the peak of regime dismantling solos and riffs. Holy moly, Miguel Ruiz and Tony Z have a lot of praise to be bestowed upon them for their salivating display of shredding; they play like machines (ironic isn't it?), I feel like the rest of the band was struggling to keep up with Miguel's and Tony's level of diversity and dexterity. Their soloing throughout Machine Men and more notably, the self-titled track, is nothing short of timeless. Miguel and Tony slay. "Blind Soul" is perhaps my favorite track on the record, it has the best flow, melody, and chorus. "Blind Soul" deals with introspect and soul-searching, it is catchy all the way through and has a very "alternative rock/metal" structure. It takes a break from the heaviness in establishing more emphasis on the melodic area of the music.

How hasn't Immortal Sÿnn's Machine Men generated more attention? Traditional heavy metal with relative issues that don't go crazy with the "political correctness" or "incorrectness" is something worth listening too and having your thoughts absorbed in. The production is clean and the music is well mixed. The artwork is perfect for the themes being explored and the ideologies expressed on the album. For its total play time of 61 minutes, remarkably it never gets boring. The vocalist Chase McClellan does a praiseworthy job of using various vocal styles such as clean singing, speed metal like vocals and even modern hard rock/nu-metal (see "Hatred Nation" for reference). The guitarists slay, while the drums follow the reckoning path. You need Machine Men if you like metal, mechanized guitar solos, awesome vocal diversity and relative social themes.