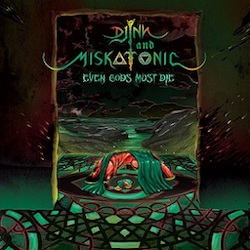 Asia has been receiving quite a bit of notoriety when it comes to extreme metal, specifically the type that dwells within the spirit of the underground. Bands such as Tetragrammacide and Genocide Shrines have released albums of unspeakable wickedness and unsettling hatred, matched with the sonic brutality of Blasphemy and Conqueror. Here we take a trip to the slower side of things within the underground. Prepare to be crushed under the weight of an elephant’s feet after being slapped by its gigantic trunk.

The opening track "I, Zombie" has that 1940’s blues vibe going for it. "I, Zombie" is the longest track on Even Gods Must Die, it spans 15 minutes, has a very heavy and ominous sound, almost like there is a zombie in the backyard heading for your open kitchen door. The vocals on "I, Zombie" are truly something special. It has a mix of singing chants that are creepy; the first time I heard it I was shocked at how precise they were on an atmospheric level. Whilst most doom metal bands use the guitars to build the evil atmosphere, Djinn and Miskatonic use both the guitars and vocals to do so. They incorporate a blend of death metal vocals and hoarse gasps. The chanting on "I, Zombie"’s sounds like they rubbed a lamp thus summoning an ill-tempered and reprehensible Genie. Around the 12 minute mark of "I, Zombie" Djinn and Miskatonic bring out the psychedelic elements and up the speed as they exit with some old-fashioned 70’s era hippie cult riffing and drumming.

There is no lightweight hitting on Even Gods Must Die; every track is composed with a confidence and foundation that’s as strong as an elephant’s trunk and as tasty as a dish of Rogan josh. Even Gods Must Die is a competition between the vocals and guitars for who would lead the flow of the album. Personally, I think the vocals win during the struggle; the guitar riffs are good but needed solos to pose a better competitive threat. Not that it damages the album’s effort to immerse the listener, it’s that the vocals are so amazing that they overwhelm any other aspect/s of the Even Gods Must Die. The drumming is very good throughout the album thanks to its adequate distribution of mid-paced and sloth segments. However, the standout element on Even Gods Must Die are the vocals. That’s the first time I have ever heard chanting hymns on a doom metal band so diverse in terms of pitch. There are also death metal growls present that serves as a welcome mucilage. Songs such as “Doombringer” and "Harvest of Kings" display the talent of these individuals. Jayaprakash Satyamurthy’s bass is loud with a groovy pulse, Siddharth Manoharan strokes the drums as elegantly as a “cover drive” by Sachin Tendulkar whilst Gautham Khandige and Sriram Kvlteswaran battle for musical dominance.

The artwork has a mnemonic nature; that "hidden in plain sight" effect is there if you look hard enough. From a close distance the artwork seems to depict an offering of some sort close to a stream, but from afar, the striking image of a green face smiling maliciously whilst some sort of goo drools from his noose presents itself. Even Gods Must Die can easily stand its ground as a classic within the genre. Djinn and Miskatonic are definitely doom-bringers; Even Gods Must Die is an example of what they have done.

Favorite songs:
"I, Zombie"
"Bones of My Brothers"
"Doombringer"
"Harvest of Kings"