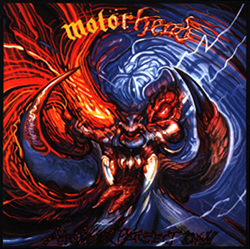 December 28th marked 5 years since that Lemmy left us in order to raise hell in heaven. No doubt, we miss him. But his music is still on earth and this applies even for Another Perfect Day, an album which celebrates its 37th anniversary in 2020. It's a special work, because it always invites me to a controversial discussion with myself. I hate its ugly artwork and songs like "Shine" or the meandering title track do not give me much, albeit they are not truly bad. However, they leave a somewhat stale taste, lack inspiration to a certain extent and show a pretty powerless overall picture. The short and really funny comic that illustrates the integration of Brian Robertson in the line-up indicates the different musical approach of the band members - and we all know, that the "integration" of the guitarist failed in a miserable way, not only because of his strange outfit on stage. Nevertheless, Another Perfect Day has its moments and, unlike other albums of Motörhead or further formations, it has not fallen into oblivion. Quite the opposite, the album has found its niche and the participation of Robertson lends it a unique touch - for better or for worse.

One of the best pieces is "One Track Mind". It is not a typical Motörhead song, because instead of cynical belligerence and straightforward velocity, the three-piece reveals its doom-affine side. Well-hung leads create a casual flow and the minimalist, catchy chorus crowns the track almost perfectly. Robertson has room to show his skills and his guitar work makes "One Track Mind" to what it is: an exciting number that withstands its rather boring pattern very cleverly. (By the way, all songs have a predictable configuration...) The short time worker on guitar plays more riffs and leads that cause cool vibrations. "Marching Off to War", for instance, sounds loose and sinister at the same time. Further examples, namely "Dancing on Your Grave" or "I Got Mine", partially show a nearly lenient side of the band due to the guitar work. Robertson seems to be on a mission and tries to transform Lemmy's spiritual baby from a metal to a rock band. This results in pieces that have nothing in common with "Ace of Spades" or comparable signature tracks of the group. Lemmy, not lazy, fights against the treacherous activity of his band mate and his boozy voice reminds us that Motörhead are still Motörhead. His "die, die" screams at the end of the closer, which scores with a nice chorus, provide evidence that a certain degree of aggression is always helpful. Nevertheless, some mysteries remain, for example the ridiculous fade-out of "Tales of Glory".

Already the first track does not have the vehemence of some previous openers. "Back at the Funny Farm" sounds somehow glassy. Once again, the guitars deliver a somewhat light touch, although the opening riff is fully convincing because of its rebellious character. In any case, the best detail of the solid number is a part of its original lyrics: "What was that injection 'cos I think it's going wrong, I really like this jacket but the sleeves are much too long". This bone-dry humour tells me that Lemmy must have been a good guy, albeit I would not describe his appearance as trustworthy. Honestly speaking, I would never had bought a used car from him. But come on, today the entire Another Perfect Day has the aura of a used car, even though it appears as a more or less well maintained vintage vehicle. These cars are symbols of a time gone by and we do not want to drive them everyday, but sometimes it feels good to take a trip with them (for example to the Funny Farm, does anybody know where it lies?). Moreover, the fact that the engine of the vehicle causes - due to an acceptable production - appropriate sounds makes it a bit easier for me that the car from 1983 lacks speed. But it is really a pity that the driver seat is deserted since exactly two years.