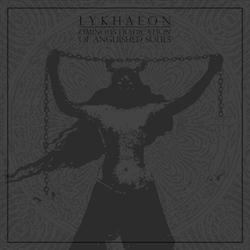 Cavernous, obliterating, ravishing and relentless are some of the words that came to mind upon hearing this monstrous call from Lykhaeon on the first instance. This unfriendly bunch hails from Switzerland, and they play a very abrasive and multi-headed, frenzied, riff-driven form of black/death metal that has a suffocating funeral death/doom touch. Upon hearing Ominous Eradication of Anguished Souls I immediately wanted to own every musical effort by Lykhaeon. Paying much attention to detail Lykhaeon approaches each element of the music with uncompromising fidelity, thus giving each section its own identity and moment of sparkle.

The overall atmosphere is chaotic but can be followed easily due to how well the band manages to move from one form of black metal to the next. Lykhaeon uses a form of effective groove laden patterns that gradually pick up in pace and/or progressively slows when transitioning between and amongst different models of the genre. There is so much happening on Ominous Eradication of Anguished Souls that it's difficult to keep up sometimes. For example, on the opening track 'Chthonios I', Lykhaeon goes from cavernous sounding death/black metal to funeral black/doom to a short splash of crazed drumming that then crosses over into 2nd wave black metal drumming and riffing mixed with all sorts of screams and a flurry of howling echoes for vocals; almost similar to the kind of you would hear on a Grave Upheaval record. Not to be mistaken, Lykhaeon has their own sound that rides on lo-fi black metal tremolo-picking and landscapes that are both tampered with ever so often by the intervention of unorthodox and sudden changes in technique and speed.

For a record that is so violent and aggressive, the last thing that one may expect is trance, however; Lykhaeon confidently builds an atmosphere that immerses the listener. This is most potent at the 5 minute mark of 'Chthonics II', where the band blends epic doom metal instrumentation with barbaric yet slightly melancholic notes. The way this influence was introduced, so unexpectedly at first listen, did not afflict the band's sound nor primary theme. The compositions are very thoughtful and implemented in such a way that the band made certain of not interrupting the enjoyment begotten. The 26 minutes go by fast, you don't even realize it until the record ends; that serves as a testament to the concentration Lykhaeon put into creating this fine piece.

I had listened to Lykhaeon's 2015 full length debut Tanz Der Entleibten, initially I thought of it as being above average by most measures but Ominous Eradication of Anguished Souls is so far ahead of their 2015 debut, it can't be categorized with Tanz Der Entleibten. The new sound the band has developed has made them vastly more intense than previous. I hope this is the template Lykhaeon keeps and expands on for future offerings to come given its successful implementation.