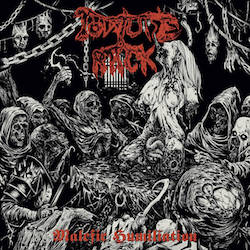 Torture Rack delivers 27 minutes of rightfully titled Malefic Humiliation. It's an offering that has great moments but eventually looses its stronghold on the listener early on.

The disgusting yet delightful opener “Festering Castration” has that swarming riffing where one gets the sense he/she is being chased by a 1000 locusts. It's one of the catchier and memorable songs on Malefic Humiliation . It has some tempo changes and pinch harmonics along the thrashing leads and low gutturals. "Masked in Leeches" follows a similar path to the opening track but takes a big step into the doom and "war metal" territories with slow drumming that escalates into steady monotonous blasts. The pace of its ending section is a good lead into the next and lengthiest serving being “Corpse Revenge”. I liked the way it started and wished that it had kept that tempo throughout its running time. The momentum became more invigorating as it approached the beginning of the middle section.

Here is the problem, for just 27 minutes, much of the music is too repetitive. Each track sounds like a precursor of individual entries on the record. There wasn't enough diversity in the song structure and musical elements to keep me interested in the remainder of the album. Though the music following "Corpse Revenge" were relatively short pieces, they sounded very identical to the opening segments of the record due to the lack of innovation. What also contributed to the downside of Malefic Humiliation is the placement of the guitar solos; in which most are towards the ending of the tracks, such as on “Destined For Dogmeat” and “Sweltering Into Gore". Even worse, some of the solos come across as filler which is a bad thing especially for such a short record.

Malefic Humiliation could have been a much better full length album if the music didn't sound lazy past the half way mark. It started very convincing but the lack of contrast made 27 minutes feel much longer.