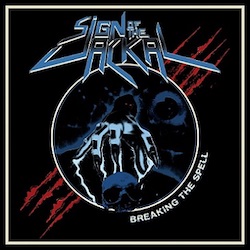 I remember hearing Sign of the Jackal way back when they were on the impressive, albeit sadly short-lived label Heavy Artillery, and I recall being most impressed by this Italian quintet. That said, like the aforementioned record label they first emerged on, they disappeared for the last five years after they produced 2013's Mark of the Beast. The short time away hasn't cost them any steps, as this latest effort, Breaking the Spell, is pretty damn solid all over.

The familiar old sound of traditional heavy metal style is what you'll hear on any offering from these guys (and impressive lady handling the vocals), so if you're a fan of Acid, early Lee Aaron, Sentinel Steel or Warlock your comfort zone won't be at all disrupted. Singer Laura Coller has the pipes to resonate perfectly long after the music has stopped; comparisons abound, she manages to shirk the tags and set herself apart from the myriad of females wailing operatically and trying desperately to hold on to that mundane symphonic metal that's still on life support despite all efforts to make it go away. This is what a real woman rocker sounds like when she's showing the boys around her that gender roles don't apply to her in any capacity. Without overdoing her range or expanding her abilities past their natural capabilities, Coller lets loose and drives the metal home with amazing  precision. She's the real deal!

The battery of Sign of the Jackal is a fresh take on an archaic, yet viable style still holding its own amid a sea of sub-genres within genres. These tracks showcase every single bit of 80's metal, a genre making a slow and steady “comeback” in the face of  the wonderful deaths of nu-metal and mallcore.  While some bands tend to just follow a blueprint leftover from bands like Holy Moses or Znowhite, Sign of the Jackal casts off stale comparisons and just settles into a groove of finely-crafted metal  that, at times, finds just enough speedy interjection to jar the senses back to a time when bands weren't so concerned with genres, tags, fitting into a mold, or appearances; SotJ is a nice spin on a classic sound. The guitars hit every nerve of power chord utopia, and the bass is heavy and fills that bottom end nicely. Further on that point, the production is really crisp and vibrant without a single trace of thin trailing or muddy overwork anywhere to be found.

Standout tracks include “Night Curse,” “Beyond the Door,” and “Nightmare,” but there's no real filler here, which is rare because usually at least one or two tracks tend to be “tag-ons” during the final touches of an album release. Nothing here can be construed as wasted time, and it's really nice to see this band that had a really killer start emerging from the dust to produce another quality product.

I think it's time to dig out my old CD's and 7” single for some reacquainting time tonight...only to eventually add this newest effort to my library, as all of you should do as well!