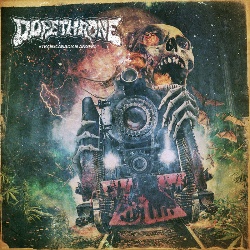 Sometimes you just need to lay off the speed and relentless blasting. Sometimes you want something which is so heavy that it will rattle the calcium out of your fucking teeth.

Dopethrone are one of those bands. Not ones to mess about with high tempos or complicated song structures, they simply do what they do. And what they do is amazing if you’re in the right mindset.

These guys have been around for a good amount of time now, coming from Montreal. Very different than the other bands we know from there. They have practically nothing in common with Cryptopsy, Despised Icon, Kataklysm, Quo Vadis, Neuraxis or Augury. They all have distorted guitars. That’s about it. What Dopethrone offers is a pretty hard and unrelenting attack, with gigantic doom riffs assaulting you left and right. The song structures and such are simple yet devastating. A lot of the time it sounds like things are just banging together, it’s more of an improvised vibe than something calculated based on technical details. These guys don’t give a fuck about technical details. The music is dense and thick thanks to the faithful wall of sound approach, and the riffs that drive the songs are quite massive slabs of metal. However, the album also has enough dynamic so it’s not a chore to listen to from start to finish, it just sort of flows very well overall. It's the kind of album that you can just put on and enjoy without worrying about it too much, or at all.

The album kicks off with “Planet Meth”, and you’re instantly treated to the thick, sludgy tones of this album. Down tuned guitars with so much distortion it actually makes you smile. The bass rattles your skull and the drums provide the thunder for these two pieces (I believe drummer Shawn is a guest musician) - it sounds like there’s six people in this band, not just two. This is denser than the Earth’s core.

What you get throughout is a mighty slab of doom/stoner rock, which grooves really hard, yet also doesn’t take itself seriously. Some of the lyrics are absolutely delightful, such as

“Weed, I wish you were here
A disease, watching it breed
Killdozering my dreams”

Yeah they’re not the most sophisticated lyrics around, but they’re fun, and these guys just don’t give a fuck. They’re here to make noise - to construct the obscenest sounds imaginable - seriously, the way the guitar and bass sounds is just wrong somehow. Sure, a lot of bands down tune, especially in this genre, but Dopethrone (name shamelessly lifted from Electric Wizard) make it work exceptionally well because the tones also fit their style of playing like a glove. And while yes, while the obvious Sabbath influences are there, Dopethrone provide more than just Sabbath worship. It’s a whole different animal.

“Killdozer” is an easy highlight, being one of the heaviest and groove ridden songs on here. Also features an already legendary video which shows people from all walks of life completely losing their minds.

If you’re a fan of the doom/stoner genre, then this is a must have. I don’t remember the last time I had so much fun listening to a stoner album, and for that alone, Dopethrone have my undivided attention and appreciation. Never stop spewing the filth, you glorious savages. Fire up the bong, and blast “Scuzzgasm” as loud as you can. You can thank me later.