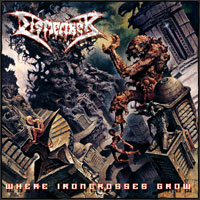 Type: Full-Length
Release Date: 2004
Label: Candlelight Records
Genre: Death
1 Where Ironcrosses Grow
2 Forged With Hate
3 Me-God
4 Tragedy Of The Faithful
5 Chasing The Serpent
6 Where Angels Fear To Tread
7 Sword Of Light
8 As The Coins Upon Your Eyes
9 Children Of The Cross
10 As I Pull The Trigger

Okay, for the impatient, here’s the bottom line: this is either formulaic Swedish death metal, punctuated with outstanding moments, or an outstanding album peppered with some hackneyed Swedish death metal. I couldn’t tell you which description is best. Deciding which of these two extremes most correctly characterizes Where the Ironcrosses Grow is impossible. The end result is exactly half-outstanding, and half-annoyingly trite. Not only that, but rather than having a mixture of one-half boring songs, and one-half interesting ones, songs range from really irritating segments, to some incredibly amazing segments. In other words, individual songs alternate between great and terrible.

Dismember retain their characteristic playing style throughout: thrash rhythms, classical scales, and an overuse of distortion that almost rivals Motorhead. The album sports a trademark, obstinate coherency that many other recent albums lack, with a playing style that sounds a lot like older Dismember. Alternately, this also sounds much like old Entombed. In many ways, this is a throwback to the days of Death Metal, when the two bands were almost completely interchangeable. What, another cover of “Sinners Bleed?” No, my mistake, that’s the track “Where Angels Fear to Tread.” Fortunately, there are enough original segments to hold the attention of listeners old enough to remember when Entombed could play.

Dismember’s influences are a bit more apparent on this release. The classic thrash influence shows strongly on several tracks. This is sometimes a refreshing anachronism, but not always; like many other reviewers, I’m forced to laugh at their attempt to turn into Iron Maiden during “Tragedy of the Faithful.” This is a fine example of a brilliant moment that is completely, utterly fucking misplaced with the rest of this album. There’s a lot of this, you know. Listening to this album gives me the feeling that Dismember fired every brilliant idea they had into random pieces of individual songs, peppering this CD’s tracks like scattershot. Granted some of their experimentation is stupid; for instance, immediately following “Tragedy of the Faithful,” we hear a poorly sampled movie chant to start off “Chasing the Serpent.” Not only is this a senseless inclusion, it also distracts the listener from an otherwise ominous introduction.

If Dismember polished the sound achieved on Massive Killing Capacity, rather than sounding like Entombed in 1989, this would receive better marks. Instead, this is either boring Swedish death with some amazing breakaway moments, or an album of outstanding music watered down with stale Swedish death. Deciding which is really up to the listener.