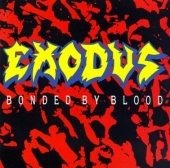 Type: Full-Length
Release Date: 1985
Label: Torrid
Genre: Classic, Thrash
1 Bonded By Blood
2 Exodus
3 And Then There Were None
4 A Lesson In Violence
5 Metal Command
6 Piranah
7 No Love
8 Deliver Us To Evil
9 Strike Of The Beast

Some years ago, the editors of the German magazine Rock Hard published their ranking of the best thrash metal albums of all times. Of course, these rankings are always dubious. But be that as it may, the winner was Bonded By Blood. (Second place went - surprise, surprise - to "Reign In Blood".) With regard to this selection, there is not much that can go wrong. No doubt that the debut of Exodus is definitely at least one of the best thrash records in the history of the phenomenal genre. It will remain a reference work for every musician who wants to create thrash compositions which are free from external influences. Even 30 years after its release, Bonded By Blood offers an unconsumed aura of ferocity and malignancy. This aura is inter alia based on the performance of a man who left the band much too soon. I do not want to use superlatives in an inflationary way. But from my point of view, Paul Baloff - rest in peace - had the most malicious voice of all thrash vocalists. He expressed all that is evil. It seemed as if he was constantly in danger of losing his self-control. But in reality, he followed a clear line, at least on the here presented work. Bonded By Blood features the vocals of a man who remains concentrated and his emphasis of the single lines matches perfectly with the atmosphere of each and every sonic frontal assault. Commuting between a cynical approach and sheer aggression, his singing ennobles the superb riffs of the "H-Team", the guitarists Hunolt and Holt. Additionally, the rarely occuring pinpoint background vocals further increase the dynamic of the tunes.

Speaking of the riffs: they sound sharp, rapid and harsh. At the same time, and this is the crucial factor, they were innovative, groundbreaking and irresistible. Back in 1985, the same applied to the whole thrashing genre and I guess this is the decisive reason why all these glorious albums of the mid-eighties will never lose their status. Never ever! They document the omnipresent pioneering spirit of this time. It inspired talented bands like Exodus, Slayer and Possessed - to name only some of the most important - in a very significant manner. But this spirit cannot be preserved for a long time. Therefore, it comes as no surprise that the stimulating effect of Bonded By Blood is rarely matched. In my opinion, its nine tracks form the best thrash debut of all times and the album belongs to the most energizing records of the genre. And this energy is evoked by the riffs - and so the cycle closes.

By taking into consideration the compactness of every single song, the whole album has the sustainable effect of a well-considered slap in the face. 'Exodus' (the track) marks the prime example in terms of directness and aggression. Its brutal lyrics are completely stupid; nevertheless, they cannot affect the joy of listening to this straightforward torpedo. Despite its raging violence, it shines with the right amount of catchiness, not only because of its conservative verse-chorus-verse pattern. But 'Exodus' is just the king of kings. The similarly configured tracks, for example 'Piranha' or the final crusher 'Strike Of The Beast', as well as the more interlaced songs such as 'Deliver Us To Evil', can compete with the perfect band anthem. But also the maliciously creeping 'No Love', which speeds up during the homicidal solos, hits the bull's eye. Despite these slightly differentiated song structures, Bonded By Blood possesses a very good flow. Furthermore, it fascinates with its homogeneity. But it goes without saying that the homogeneous overall impression constitutes only one of the many advantages of this milestone. In particular due to the excellent sound of the guitars, the perfect production is no less important. Finally, the great number of divine moments - for instance, listen to the fast-paced chorus of 'Deliver Us To Evil' which contrasts with the other parts of the song in an outstanding manner - puts the album in a class of its own. During the last three decades, its liveliness has not faded. Due to this situation, it does not matter that the lyrical content is either naive ("fists are in the air, banging everywhere") or sick ("we rape and murder your wife").

Well, from my point of view, the comparatively lame "Master Of Puppets" does not fall under the thrash category. But some might say that Metallica's first two full-lengths are the most important thrash albums of all times. I disagree. Quite apart from my personal favorite "Hell Awaits", I think that the blood brothers Bonded By Blood and "Reign In Blood" had the greatest influence on the worldwide scene. While Slayer's third full-length glitters with sheer aggression, the neckbreaking debut of Exodus kills with style. To sum up, its weapons are the cruel yet memorable melodies which are formed by the sensational riffs, the howling guitars (especially during the fantastic solos), the nifty tempo variations and, of course, Baloff's performance. It is therefore a matter of personal taste which one you prefer. I am undecided.