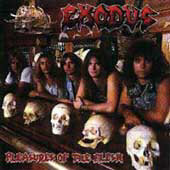 During the period between their legendary debut and this album, Exodus had undergone a clear change. The very homogenous songwriting formula of the first full-length had turned to a new approach which was a bit more diversified. The lyrics of Pleasures Of The Flesh covered a wider range of topics and did not only deal with brutality and violence as an end in itself. The unusual cover motif was more or less socially acceptable and, last but not least, Zetro Souza showed up as the new lead vocalist after the departure of Paul Baloff.

Zetro performed in a convincing way. He picked up the vibration of each and every song while resisting the temptation to copy the vocal style that Paul Baloff had chosen on Bonded By Blood. The unchanged instrumental section worked in a technically flawless manner. Anything else would have been a great surprise after their mature performance on the debut. Overall, the band played tight while presenting the coherent song material. The tracks themselves showed a multifaceted picture and they benefitted from a clear and powerful production.

Bonded By Blood had offered some slower parts, but its successor revealed tunes that flew completely at a leisurely pace. This loss of speed did not go hand in hand with a lack of quality. Mid-tempo tunes such as '´Til Death Do Us Part' or 'Braindead' left a lot of space for the guitars to create an intense atmosphere. Due to its powerful guitar lines, the ending of the first-mentioned song was the most clear-cut example. Furthermore, these two songs profitted from the excellent riffs that pointed them in the right direction. By the way, it goes without saying that the album included a large number of captivating riffs. They sounded edgy (for example, listen to 'Parasite') and marked definitely the trademark of the band's sound. In my humble opinion, the majority of the riffs would still be predestined to teach children the splendour of thrash metal. It is just a pity that I do not know a school where thrash metal is taught. Clearly, this state of affairs needs changing.

The versatile album presented a lot of highlights. The epic yet aggressive title track with its original jungle intro dominated the B side, but the menacing 'Chemi-Kill' was certainly no less exciting due to its bulky riffing and the sociocritical lyrics. Please pay attention to the fine difference, a song about industrial pollution would have been unimaginable on their debut. The A side was almost flawless, only its final track did not meet the highest demands. Incidentally, the same went for the last tune of the B side. But do not get me wrong, each and every song made a - larger or smaller - positive contribution to the final result. The only exception was a short piece that featured just acoustic guitars. But this tune did not bother me due to its brevity.

Exodus had to deliver a worthy successor for their groundbreaking debut and they mastered the task almost perfectly. They knew that they were at risk to release a lukewarm second part of the debut if they did not find a new musical direction. It was therefore a wise decision to change their compositional approach according to the motto "as much as necessary, as little as possible". Of course, Bonded By Blood remained their masterpiece. But Pleasures Of The Flesh became a serious competitor. Honestly, I fear that Exodus will never again achieve this level of musical brilliance. Too many attempts have failed.