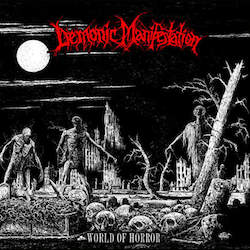 Mexican metal is a big deal, as they strive to become heavier and meaner with each band that comes out.  Demonic Manifestation is one of these bands, and they are bringing 90’s styled Swedish death metal to the table.

This western Mexico quintet formed in 2012, and set out to bring forth their take on the whole Swedish DM of the early 90’s.  Harsh and intentionally guttural, they made a name for themselves redefining this genre of metal and adding in their own dosages of pure mayhem and destruction with each blasting beat and pounding drum. The World of Horror album as a whole is good, and having some fire to them as well, yet some parts seem to get lost in the ferocity – and this seems to stay relatively the same through tracks.  There are amazing tracks scattered among the 10 songs offered up, the jewels among the same-old rocks in the metallic pond. Crematory and Funeral Fuck are stellar tracks that showcase brutal DM done good, while the oddly titled Zombiechrist has some wicked lyrics, but overly generic riffs kill them outright. Some bad recording choices also has a big impact on it all.

It is nothing new, nothing ground-breaking – and yet, it is mainly enjoyable to listen to. It is an average album which seems to hint that the band may get better and better with each release they offer up… but as of now stands a tiny bit better than average, and hoping it does not drown under the waters of DM mediocrity.