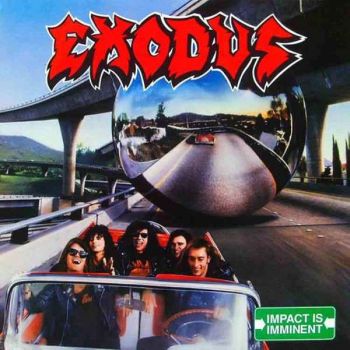 I really want to call this my favorite classic Exodus album, but I just can't, sadly. Among my first listening of Exodus, I was super into this album's sound and style, specifically the first three songs and nothing else. This album has the best instrumental sound out of all their 80's albums in my opinion; the guitars have a thick, slightly groovish, sort of "electric" feel type of sound going on, and the snare is kinda clanky while still remaining softish and solid. I really love how everything sounds on this album, that's why I value this over the others; mostly because of the sound of the instruments.

The best parts (and pretty much the only parts that have worth) are the first three tracks. The title track 'Impact is Imminent' starts off with an energy-filled bouncy riff that gets you moving, with a great skank beat behind it, couldn't be better. 'A.W.O.L.' opens with a swift riff that's similar to a triplet pattern, followed by a backbone of a drum beat to carry it along and give it some personality. 'The Lunatic Parade' is slower and not as great as the first two tracks, but it's still a great song and is one of the tracks that's again, worth your time. It's a down-tempo song, and even if it lacks riffs that aren’t exactly as good as the first two tracks, it's still great. The song actually goes somewhere and keeps you entertained until it ends. 'The Lunatic Parade' has some personality, despite the lack of riffs, that's the issue with this album. An awesome instrumental sound taken advantage by lackluster songwriting.

After the first three tracks I'm pretty much forcing myself to listen to the rest of the album. It doesn't capture my attention as good as the first three songs did; the songs after track 3 don't go anywhere, the songwriting is bland and has no personality. Compared to the first three songs, the rest of the album ain't anything special at all. It really saddens me that this album has such great potential but the potential is pushed aside due to bland, uncreative, dead-end songwriting. I've listened to this album in its entirety before, but I don’t even remember it really, today I listened to all of it properly; and I wasn't all that thrilled by anything I hadn't heard before.

Wish I could call this my favorite classic Exodus record. In my head it's always been my favorite even though I'm only fond of three songs. I still like this album but don't really give a fuck about anything that isn’t 'Impact is Imminent', 'A.W.O.L.', or 'The Lunatic Parade'. The cover art is cool though, that's a big contributing factor as to why I have an artistic appeal towards this album, but aside from the first three tracks and the cover art, nothing is of much worth here. I prefer the 2000's- modern era Exodus anyways.

I'd definitely wear this on a shirt, I love the cover art, but you'll never see me listening to anything other than the first three songs.