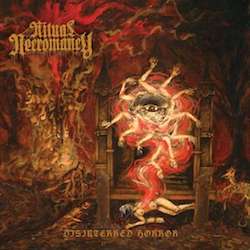 This is what it would sound like if the universe decided to enfold, implode and swallow itself in a stir of fathomless depravity and sin in all of its tortures and seductions meshed together in bravado. The first time I heard Ritual Necromancy I knew without a doubt they were the real deal. Disinterred Horror is their best offering to date. This typhoon of tyranny and transfixing turmoil will gut the last bit of lingering light from your soul. Death metal album of the year for me so far. I don't see anything topping this unless Impetuous Ritual delivers another one of its incurable ailments without warning. A catastrophic arsenal of atomic artillery Disinterred Horror truly is.

"To Raise The Writhing Shadows" kidnaps and hypnotizes the listener, places him/her on an altar of cryptic symbols, attaches chains to the arms and feet and hooks them to monster trucks all facing separate directions, I don't have to tell you the rest. Demolishing guitar tones battle against a vocalist that sounds like a bear and lion are engaged in territorial warfare as they dance in the depths of destructive drumming and riff rampage.

"Command of the Sigil" is one of those tracks that can really send the dance-floor into a state of delirium. The vocals are deeply enunciated (as throughout the album), they are affirmative with a bulldozer like busting and boom. The song is consistently mid-paced with short bursts of increased speed just before its chaotic ending.

Disinterred Horror has near perfect timing, it's neither too short nor long. The drum snare is beefy and the mighty mage behind it occasionally borders the semi-technical side of death metal whilst still hitting heavily. There is also variation in speed throughout the album with the longest song "Cymbellum Eosphorous", showcasing a slow inundating approach baring much resemblance to funeral doom.

The production is somewhat clear but still has a raw edge to it. I love the pinch harmonics on Disinterred Horror, they're catchy and makes you want to repeat the album just to relive the buildup leading towards those sections. Disinterred Horror does justice to Ritual Necromancy's Christ-less catalog. It's been a long wait since Void Manifest stormed from the croaky catacombs, now the ghouls convoked have brought with them the transgressions of old.