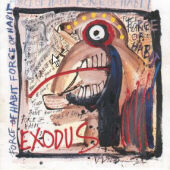 Type: Full-Length
Release Date: August 17th, 1992
Label: Capitol Records
Genre: Classic, Thrash
1 Thorn In My Side
2 Me, Myself & I
3 Force Of Habit
4 Bitch
5 Fuel For The Fire
6 One Foot In The Grave
7 Count Your Blessings
8 Climb Before The Fall
9 Architect Of Pain
10 When It Rains It Pours
11 Good Day To Die
12 Pump It Up
13 Feeding Time At The Zoo

There seems to exist an unwritten law. It stipulates that there comes a day in the life of each and every appreciated band when it releases a more or less gruesome album. In terms of American thrash metal, these flops have names like "Diabolus In Musica", "Souls Of Black" or - you guessed it - Force Of Habit. But however, let's face the truth.

The album clocks in at almost 69 minutes. Such an extraordinary quantity can be a sign of creativity. But it can also indicate helplessness. How many tracks do we have to record so that everybody finds at least two or three songs that meet his taste? This seemed to be the initial question for the band during the production process. In my humble opinion, Exodus delivered only one number that could be compared with their old classics. They hide it on the last position as if it was suitable to damage their reputation. This positioning showed their twisted thinking. In fact, exactly the opposite was true. 'Feeding Time At The Zoo' stood in the tradition of frenetic songs like 'Deranged' or 'Parasite' and was the light at the end of the tunnel. Its sharp riffs and speedy drums merged to an aggressive thrasher. The amazing guitar solos also made an important contribution. Due to the vehemence of this conclusion, it seemed to be a forgotten track of the Impact Is Imminent session. Anyway, this song also emphasized my annoyance, because it proved that Exodus were actually still able to compose gripping speed metal eruptions.

But they preferred to record completely worthless cover tracks of the Stones or Elvis Costello. And I am sorry to inform you that this was just the tip of the iceberg. Lame mid-tempo tracks lengthened the album in a nerve-shattering way. The more melodic approach did not work and Exodus found itself caught between a rock and a hard place. Their name was associated with pure thrash massacres, although they also had already offered slightly progressive tunes like 'Chemi-Kill' or robust songs such as 'The Toxic Waltz'. But Force Of Habit did not only suffer from too much foreign influences like wind instruments or slide guitars. The majority of the compositions just lacked of quality. For example, the chorus of the title track did not add any value to the boring piece and the same applied for the amateurish chorus of 'Fuel For The Fire'. The fairly solid riffs failed to create an intense aura, not only because of the low average speed of the tracks. An additional factor was that the songs were too long. Who needed expanded songs like 'Count Your Blessings' (seven and a half minutes) with its horribly squeaking guitars or 'Me, Myself & I' (five minutes)? Admittedly, the longest song of the album, 'Architect Of Pain', was among the better tracks of this record. Due to its - you guessed it again - mid-tempo approach, it bobbed up and down like an abandoned rowboat in a lonely bay. But it scored with its dark aura and the passionate vocals of Zetro who gave us an insight into the life of Marquis de Sade. But it did not take a lot to belong to the "highlights". Songs like the miserable 'When It Rains It Pours' demonstrated that impressively. Once again, the chorus seemed to be the work of absolute beginners and I had to puke in view of the infelicitous Rock'n'Roll elements of the song.

Finally, I did not like the production, although it did not suffer from major deficiencies. I have to admit that my aversion against the mix was probably just the consequence of my disappointment about the unattractive and partly imbecile compositions. Of course, every band has the right to change its style. But this does not mean that this is a good idea in each individual case. Worse still, Exodus did not impress with a new style. They just offered (too) many songs that had nothing in common except their mediocrity. No doubt, it was time for a break.