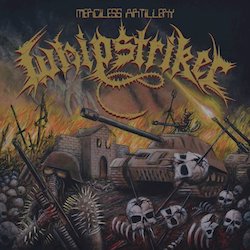 Since I have started to write reviews, I get some promotional material from time to time. I am always surprised that all these promo messages begin with more or less the same words. It seems as if each and every new album is "highly anticipated". Even the debut of an absolutely unknown combo from Greenland seems to be very hot stuff that everybody wants to have immediately. Any doubts from your side? Don't forget that lobbyists never lie! It is therefore only logical that Whipstriker's fourth album has been "highly anticipated" as well. I freely admit that the band does not originate from Greenland and Merciless Artillery is already their fourth full-length, not their debut. Nevertheless, where are the crowds that eagerly awaited the release of this work?

Whipstriker have not changed their style and I don't think that anybody who is familiar with some of their earlier works expected something else. A snotty attitude meets mostly casual riffs, predominantly fast-paced rhythms support the hostile and throaty voice that make me think of Cronos. However, lone wolf Whipstriker tried something new. No, I am not speaking of the redesigned band logo. Our South American friend did not play the six strings, all guitar parts were contributed by a friend of him. Honestly speaking, this fact might be interesting for the musicians, but it has no impact on the result. Merciless Artillery sounds very typical, does not hold complex song patterns and reflects the integrity of the one-man army. Better still, some tracks kick ass.

The rapid 'Enemies Leather' blows the audience away in view of its strict verses, the mean chorus and the pretty strong solo that gives the instrumental part an almost virtuoso touch. Not to mention the main riff that drives the song forward. Moreover, it is nice to see that the Brazilian warrior knows the value of high velocity. There are more speedy songs which cannot hide the fact that they originate from the same composer. Especially the fiery 'Calm After Destruction' must be mentioned in this context. It comes directly to the point and I am sure that Joel Grind from Toxic Holocaust, the man with the worst hairstyle in the metallic universe, likes this piece, because it does not differ much from his own tracks. Furthermore, he handled the mastering of Merciless Artillery and he did a pretty good job. The production conveys this filthy element that this kind of music needs in order to shine in full glory.

There is another parallel between Whipstriker and Toxic Holocaust. I am speaking of the short playtime of the album. Nobody expects an opulent work in view of the here performed style, but nine or ten new rockets would have been a good thing. Thus, rather lackluster pieces like 'Warspell' have a comparatively great negative impact. Anyway, fans of very early Sodom, Motörhead or Cruel Force should not ignore this "shortplayer" and the same applies for all those who like to feel the spirit of antisocial music, regardless of whether they prefer metal or punk. Merciless Artillery does not mark a new milestone in terms of black thrash metal, but it will not disappoint its target group as well. And now excuse me. I have heard that a formation from Greenland will publish its first rehearsal demo. I am sure that it is highly anticipated!

I feel like I’m listening to what venom should have evolved into. Whipstriker's 2017 release, Merciless Artillery sounds like a tribute to the early days of Venom’s sinister collection of albums with a modern touch of energy. Primarily At War With Satan, Welcome to Hell and Black Metal; the albums that would define and spawn genres, most notable 1st wave black metal and its many sub-genres. As much as I admire Judas Priest, Bathory and Iron Maiden, for me the father of metal will always be Conrad Lant (Cronos). Judas Priest and Iron Maiden had the vocals but the imagery and lyrics were channelled through Cronos. Merciless Artillery sounds like it was made in 1980, the Cronos vocals mixed with themes of war and Satanism has more than one time tricked me into thinking that I’m listening to a Venom album. The Venom worship is done very precisely on Merciless Artillery, it captures the speed, the wicked riffing of Mantas in his prime and the overall presence Venom created whenever they had put out a new record throughout the 80’s.

The title track makes it clear to the listener that Whipstriker are by no means a new nor rookie band. Though Merciless Artillery happens to be my introduction to the band, I felt very comfortable with what was being played and never once did the feeling of boredom arise whilst listening to the record. That’s saying much for a band that sounds like straight Venom worship, especially in a time when many worship bands have emerged and have absolutely left me with a horrible feeling of bitterness and disapproval of the music they have and are creating. Such bands are Cist, Gruesome (whom have just aggravated me with their Death worship) and Them who have yet to put out 1 decent track that I can say deserves some credit for being able to replicate King Diamond. The only band to successfully attempt a King Diamond formula is Germany’s Attic; however that’s a different tale for another time. Whipstriker however, demonstrates to the listener the appropriate way to pay homage to any particular group without giving a tacky rendition of an elder metal band still active within the metal scene.

The music on Merciless Artillery is filled with memorable moments; there were cases in which I could not resist the inner urges telling me to head-bang to songs such as “Merciless Artillery”, “Rape of Freedom” and “Calm After Destruction". There is even a segment on “Rape of Freedom” that sounds very similar to a guitar lead on Scorpions’ “Dynamite” track; (see timestamp 01:35). With Scorpions being one of my favorite all time bands it was impossible to not succumb, and with the precision at which the lick was played, I just had to. The twin guitar leads followed by saucy soloing being aided by the strength and stamina of fleet drumming and a decent production that is both cloudy and thick, gives the listener just what was expected from an act in the endeavor of resurrecting the early days of Venom with a focus on speed. Some of the best soloing I’ve heard in a while from a speed metal group jump out at you surprisingly on Merciless Artillery. The guitarist on here are masters of their craft. They do not disappoint at any particular section of the entire record; they deliver a hurricane of riffs and solos that will sweep clean any doubt of their musical commitment and competency. As a band Whipstriker are a solid unit, they have taken a formula of old and re-presented it in a modern age filled with bands that have no idea on how to successfully idolize the fathers of metal.