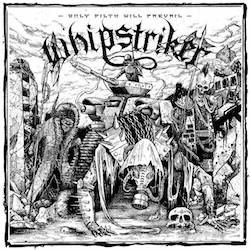 Whipstriker – this name stands for a project whose operator likes to release very short albums, but tons of EPs and splits. Crude tactic, if you ask me. Only Filth Will Prevail is his masterpiece in terms of brevity. We get nine songs which know the 29-minute limit only from hearsay. Anyway, the band offers exactly the sound it stands for. Dirty black thrash is the name of the game and more than a minimum of riffs per song would be inappropriate. Whipstriker rather prefer a hinge of punk that compliments the prevailing metal vibrations – and they love to give full speed. The only mid-paced piece is cleverly placed on the fifth position. 'Flames Of Hate' greets with an effective, contaminated riffing from the cesspool that once Cronos, Mantas and Abaddon created with devious face and much pleasure. It’s a cool number, an almost epic one with a length of more than four minutes (!), and it is always nice to experience that it does not need much to create a sustainable, in my brain resonating song.

But, as already said, the speedy songs give the “long-player” its character. Whipstriker’s musical dogma is as short as their songs: no frills. Those who bang their heads in ecstasy while listening to the strong opener can buy the album immediately, because the level of variation is small. Very small. Or even smaller than very small. But who needs this feature as long as we are speaking about a playtime of less than 29 minutes? Whipstriker race through the Brazilian botany and simple yet energetic tracks like 'Nuclear Metal Blood' or 'Waiting for The Doomsday' fulfill their mission nearly perfectly: they deliver sordid fun and nothing else.

The vocalist loves to sound like Cronos, a boozy yet subliminally violent atmosphere is omnipresent and the sharper the riffs, the better the songs. The guitar work of the explosive 'Flag Of Cruelty' holds some crustcore elements, the strangely titled 'Armless Dance' relies on its wild liveliness and the closer 'Armageddon Delight' shoots guitar riffs and lines of eternal nastiness into the orbit. Maybe the conventionally designed pieces do not deliver highest art, but their brutal eloquence is impressive. This is all the more true as the production has found a very good balance between a musty cellar vault and a tidy recording studio. So there can be no doubt that fans of Venom, Warfare (nice cover, but not really necessary) and Toxic Holocaust (before they recorded “Primal Future 2019”) will find a place in their heart for the aptly titled Only Filth Will Prevail. Even though Whipstriker’s albums usually have no long-term effect, this one is – just like their further works – recommended for all those who wash themselves with mud. Maybe it’s even their best one so far.