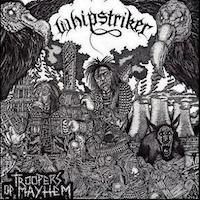 No sweet without sweat. Following strictly this guideline, Whipstriker publish constantly new songs without interruption. This is their second full-length after a large number of split albums. It provides coherent compositions which are mostly based on conservative song structures. It goes without saying that they do not offer something that has never been heard in the metal universe before. But the songs are concise while avoiding repetitiveness and they do not lack of energy and idealism. As a first conclusion, it can well be said that Whipstriker feel obviously comfortable in their black thrash metier. Nevertheless, they are also influenced by protagonists of the traditional metal sector without creating old-fashioned or lackluster songs. The opposite is the case. Once up to speed, Whipstriker are able to create really superb tunes. I may give you three examples.

The opener which is also the title track is - as it must be - among the highlights. It starts with a dirty riff without wasting time for a needless intro. The up-tempo verse and the pounding bridge lead to a slightly weaker chorus. All the same, this is a good start, not at least because of the wild guitar solo. The filthy 'We Came From The Wild Lands' follows a similar pattern. Once again, the main riff knows how to thrill the listener. But I would undoubtedly choose 'These Grey Days', if I could take just one song of the album with me to a deserted island. It is continuously driven by an incredible riff that amazingly combines aggressiveness and melody in a perfect manner. While these outstanding songs stick closely to the essence of black thrash metal, the other cuts offer a greater variability without surprising with totally unforeseen compositional techniques.

For example, Tony Iommi seems to appear briefly at the beginning of the ponderous 'Murder In VM Street' due to its Sabbath-like heavy riffing, while Lemmy supports the three Brazilians with the riff and the guitar line of 'Streetrap'. (By the way, do not be fooled by its confusing name, thankfully there is no shitty rap far and wide.) But it is no crime to be influenced by these living legends. Quite the contrary, I would like to recognize their sincere attachment to the old heroes. Those of you, who are familiar with the punk scene might also identify some influences of this stuff, not only in terms of the cover that looks like a leftover of a political polarizing hardcore gang. Independently, Whipstriker feel free to implement their own ideas. Perhaps some of them are strange like the instrumental part of 'Lucifer Set Me Free' which is characterized by an organ. But that as it may, they do their own thing and consequently avoid plagiarism. This is despite the fact that the vocals still sound a bit like the voice of Cronos. Taking all these aspects into account Whipstriker surely did not create an epochal output. They just released an above-average album - and I like it.