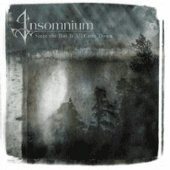 Type: Full-Length
Release Date: May 4th, 2004
Label: Candlelight Records
Genre: Death, Melodic
1 Nocturne
2 The Day It All Came Down
3 Daughter Of The Moon
4 The Moment Of Reckoning
5 Bereavement
6 Under The Plaintive Sky
7 Resonance
8 Death Walked The Earth
9 Disengagement
10 Closing Words
11 Song Of The Forlorn Son

Your life is crashing down. Perhaps your significant other just left you, perhaps you lost a loved one, maybe you're blaming yourself for it. Either way, the circumstances of how you got here don't matter. What matters is that your world is a cruel, dark place, never again to be graced by any form of joy or solace. You're being crushed by utter despair and there's no way out.

That's the emotion Insomnium seek to convey on their sophomore album Since the Day It All Came Down, and they succeed; this is one of the bleakest records I've ever heard, a journey across frozen plains, through gloomy forests and into starless nights with harsh moonlight as your only companion. The human mind is incredibly fragile and with this release the Finns ponder what happens when it's pushed to its very limits by grief and hopelessness. This tone is apparent from the first few ringing piano notes of 'Nocturne', which foretell of the endless night to come. The melancholic piece builds for a couple of minutes before seamlessly transitioning into 'The Day It All Came Down', and thus begins a 55-minute, unrelenting barrage of all that is miserable and harrowing.

While this record isn't too different from the band's 2002 debut, it does take their sound in a distinctly new direction. The Gothenburg riffing off Halls is still present, but it was here that Insomnium made atmosphere the focal point of the music. The 8-minute epic 'Disengagement' probably showcases this best, with heavy riffs and roaring verses wandering into introspective and expansive acoustics combined with whispered vocals. The band know exactly when to put a quiet section in as well - even the more straightforward, faster "headbanging" songs like 'Bereavement' and 'Closing Words' fit a couple in to great effect.

The final and possibly greatest aspect of the album which needs touching on is the lyrics. Whether they're a form of catharsis or a painful reality to you, they're pure poetry. They transform the frostbitten landscapes evoked by the meandering instruments into mere backdrops for the speaker's dreary misery. Take for example the chorus in 'Daughter of the Moon':

"Vanished is the light we had, hidden deep in rimy soil
Bereft of us the one we cherished, lost forever our love
Still at night I see her figure
Flickering on moonlit glades
But passing is the hope she's giving
Just the faintest breath of air and she's gone again"

I consider this some of the most evocative lyricism not only on the album but in metal as a whole. The combination of beautiful natural imagery with the speaker's desperation and depression resonates particularly strongly with me. Being at one with nature in a peaceful forest glade at night is about the most calming thing I can think of; if no solace can be found even in that, then there truly is nothing left for the protagonist. I can only be thankful that as of now I've never had to experience such hopelessness.

In summary, Since the Day It All Came Down was where Insomnium found their identity and truly became the band they are today. It's a near-perfect voyage into a mirthless, callous world. Atmosphere trickles out of every instrument, forcing you to contemplate the fact that some people's realities are as bleak as the one presented. And perhaps more terrifyingly, that one day that reality might be yours...

Insomnium could very well be the evil guy on time-out -- a satyr laying gently in his palatial abode eating spiked grapes until its next kill. Since The Day It All Came Down is a solid and smooth effort, driven by melancholy and mood more than cohesion and originality. The album evokes the mood of Dark Tranquillity’s Haven at its best, and at its worst it puts Haven on repeat for several rotations without showing the character of the band.

Having said that, Insomnium is a band full of potential. That potential can be tapped should they decide to break out of the melodic paradigm that spawned it, they could make serious waves creating mood metal that is technical and still very emotional. Listen to "Death Walked the Earth" and you will see that every member of the band has the ability to generate good time changes, solid rhythm and downright good songs.

Stick around a little longer, and the eight and so minute epic "Disengagement" and "Song of the Forlorn Son" are enrapturing at their best, full of varied melodies and an excellent tone that was used rarely in other parts of the album. The beginning and end of the album exhibits the care this band took to put together an album with strong production value. I could listen to this album and declare that it was a good morsel, but until you let the satyr out to fuck like the heated goat he is, until evil-guy can come out to play, I can’t say I’m entirely sold. But fair is fair, Insomnium is a solid band and they should be liked and respected, so I’ll bite and say that this album is worth a buy on the good faith of a talented band with much potential.