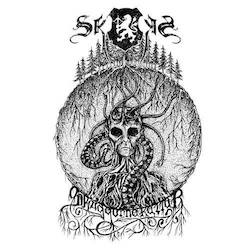 I've known little about Skogen prior to this release. The lyrical themes of their music revolve around topics such as nature, darkness, death and destruction. Their sound can best be described as black metal with elements of clean folk singing, death metal growls, melodic death metal and some keyboards. Skogen's music on Skuggorna Kallar has a great sense of maturity and diversity in each track. It is not constant monotonous vocal shrieking as many black metal bands do; no, it has different vocal patterns and a good structure and pace at which the music is played. Some songs are geared towards melody whilst others take aim at accomplishing simplistic and atmospheric overtones via mid paced to almost doom metal structured instrumentation.

Songs such as “The Suns Blood” and “Det Nordiska Morkret” have a progressive/folk metal feeling behind them. The use of clean singing and harsh vocals add a welcoming toggle between grim and grace. The same can be said about the electrical guitars and the acoustic guitar parts on the record. I think Skogen did this to give account for each lyrical aspect presented on the album. The 9 minute epic titled "Beneath the Trees" is arguably the best track and is the accumulation of Skogen's variation on Skuggorna Kallar . Each element highlighted in their music can be found on this track. All characteristics are put into operation in order to solidify and express the picture as a unified whole. The electronic and acoustic guitars played a key role in assembling the memorability of the song. You can tell the guitarist was having an enjoyable experience particularly on "Beneath the Trees".

“The Funeral” displays Skogen’s death/doom metal abilities in the vocal department. The death growls sound deep whilst being channeled through the somber atmosphere. The are similar to that of Draconian’s Anders Jacobsson on the Arcane Rain Fell album. I cannot underline enough on how well Skogen have incorporated different types of musical elements to create many instances of euphoria.

Skogen certainly have their own identity in contrast to the propensity of other black metal bands. However, there are moments on the album which remind me of Kampfar, Gormathon and Draconian (Sweden). Skuggorna Kallar has a production that leans towards the rawer side whilst still providing enough clarity to ensure the music can be appreciated by the listener. Its the kind of record that you can engross yourself in easily because of its simplistic and effective approach.