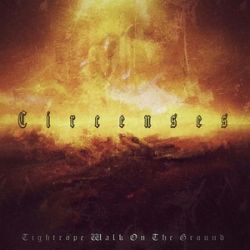 Circenses is a one man progressive death metal project hailing from Finland. Tight Rope Walk On The Ground is the project’s debut album that was a very pleasurable listening experience. Circenses is proclaimed to be a progressive death metal band, however, there are other musical styles incorporated into the sound. Many times throughout the album one can hear the resounding influences of metal-core, thrash metal, gothic metal and melodic death metal. Tight Rope Walk On The Ground is 33 minutes in length and whilst having other sub-genres of metal play roles, it never sacrifices the progressive facet. The guitars have a Killswitch Engage vibe, whilst the keyboards echo melancholic and dark atmospheres. The drumming evinces semi-technicality, blast beats and thrashing moments. The feeling generated by Tight Rope Walk On The Ground constantly plays with the listener's emotions via ever-shifting soundscapes that negotiate rather than fight in order to achieve predominance over any track. Each element of the music is coaxed such that space is preserved for other artistic directions to take the lead. What Tight Rope Walk On The Ground does very well is give the listener just enough to want more, nothing is overdone or overused.

“Kill the Words” and “Lunacy” are very strong opening songs, they apply much focus on melody in the main choruses and leads via the use of the keyboards. You feel as if you are drifting with agile from one mood to another. I mentioned Killswitch Engage earlier when giving reference to Circenses’ guitar tone, this feature can be heard clearly on “Kill the Words” (and other songs). Even the pattern of playing the guitars mimic’s that of Killswitch Engage. When comparing the tone and pacing of the songs one could argue that “Lunacy” has more passionate vocals that are marked by loud metal-core snarling, faster drumming a bit of technicality sprinkled on the right parts. The manner in which the keyboards are used adds a welcome magical flavor to the music. What this does is denote Circenses ability to gather and combine particles of rhythm and musical differences to build a functional entity of ear-worm. Indeed each song is memorable and has a high replay-ability factor that sets in by the self-titled track. I’m impressed by the order in which the songs were arranged; this assortment positively impacted the music’s flow, thus contributing to an addictive listening experience. The stability of the rhythm from song to song created a feeling that suggested each entry was an extension of the prior; but more importantly, an integral and vital piece of the album’s greater image. As I’ve stated in previous reviews; flow is highly important to the success of any given album; if you can keep the listener nodding and humming to the tunes then consider your effort to be a successful one.

“From Darkness To Joy” and “Swallow Your Pride” are for me the songs that glue and cement the different tones, feelings and playing styles of Tight Rope Walk On The Ground. They shine a light on the images portrayed and clarifies any misunderstandings or misjudgments that may have bothered the listener in terms of identity and purpose. Severi Osala’s clean vocals on “From Darkness To Joy” combined with the gentle keyboards and acoustic guitar evoke a sense of freedom/relief in the listener. The heavy chugging guitars along with the light touches of the keyboards and quick double bass + loud cymbals incite a dreamy presence that mystifies the record. "Swallow Your Pride" takes each memorable moment of the music and dishes it out at the listener; it’s such an awesome song that has those fist-pumping, headbanging blast beats integrated with magical fairy-esque moments via the keyboards.

Tight Rope Walk On The Ground has a clean production that many will enjoy once they give it a spin. I’m glad I was fortunate to receive the promotional material; given this is some of the best progressive death metal I have heard in a long time. I hope there is more to come from Severi Osala’s Circenses.