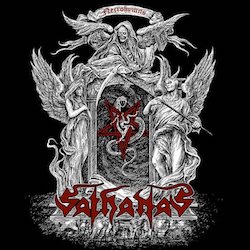 Frontman Paul Tucker does a good job of songwriting here, producing some pretty intense blackened thrash metal. I'd say it's a step-up from Worship the Devil. It's stronger in the riff department and production. The length of the album is a little short though, spewing out eight songs and thirty-two minutes in length. But that doesn't take away from the sick music/lyrical concepts this record has to offer. Every song is good, the production sound is a bit raw, but by thought and design and riff-wise the music is positively solid. The vocals are screaming as with past releases and duplicated but this one has even with more aggression.

I have two other Sathanas albums and this one tops both. Between the music and production, Necrohymns definitely conquers. The music and aggression is more concentrated on here. Everything is more intense and lethal. These guys know how to make songwriting for this genre quite impeccable. The tempos aren't too fast but the guitar work is done with precision. No track on here is malicious in the sense of not well done. All of the tracks are done precisely the way that they meant to be composed. I can't single out a track on here that I disliked. All of them are my favorite.

The drums are well done too, following the music just right. However, the production made the snare a little bit flat. That's why I took some points away from the overall score. All Sathanas releases have been a little shady in the production department. Worship the Devil was like that in a way as well. Same with Crowned Infernal. But that doesn't mean that these guys don't know how to write good music. Their budget might be the reason for the lagging production quality to their albums.

Check out "Throne of Sodom" and "Harbinger of Death", those are two good tracks from the album. That is, even though all of the tracks I felt were solid. This album is available through Transcending Obscurity Records.  I would check out those two songs I mentioned and you can get the digital album through Spotify. It's worth downloading, definitely. If you like metal played in a wicked fashion and you want something extreme, Necrohymns will hit home for you. Too bad that this band is not more well known. Hopefully this review will help to get there faster.

Sathanas paves an exit wound with their 10th release titled Necrohyms. They have been casting stones since the late 80's. What I find unfair is they have not received the attention and praise other black/thrash metal bands have garnered even though they have been in existence since the era of first wave black metal. Usually black/thrash metal is something I’m extremely picky about even listening to, but this release has opened my mind and encouraged me to check out other bands of the same genre. I received a promo of Necrohyms and upon immediate glance at the artwork, I was enthralled; black and white illustrations always sucker me in anyways.

Sathanas is listed as black/thrash metal on The Metal Archives, and though I am not familiar with their past installations, Necrohyms sounds like a very groove driven brand of black/thrash metal. There is a significant amount of gravitation towards the flow via mid paced compositions. From the inception of "At the Left Hand of Satan" the blazing speed is present then slowly dissipates and is replaced with a mid paced flow that is accompanied by mid tempo guitars as the leads. This formula is detracted and revisited momentarily once "Harbinger of Death" begins and serves as a blueprint for the remaining music to be heard on Necrohymns. That is the formula for primarily the majority of Necrohymns. The fast repetitive boring thrashing I was expecting to hear was absent for the albums entirety. Instead what I got was a focus on melody and sensible instrumentation. Sathanas did not go all crazy with the trash metal and forget the diversity aspect of it. Thrash metal is the one genre I get bored of quickly, however, Sathanas' ability to let the groove take dominance over the music payed off well. Though only 32 minutes in length, Necrohymns offers a genuine amount of memorable songs that you can sing and hum to. "Raise the Flag of Hell" and "Witchcult" are strong contenders for best songs on the album. They carry the momentum of the record with consistency due to short bursts of detailed guitar solos, obscurely pronounced vocals and candid drumming. To my surprise, Necrohymns was enjoyable unlike other thrash/black metal albums released this year that I refuse to give a second chance to. Though not as ferocious as some of the other albums I have had the fortune of hearing, Necrohymns feels more like a final neatly and gracefully crafted piece of combat embroidery.

I have had at least 2 full listening sessions of Necrohymns, and being Sathanas' 10th full-length release, I feel compelled to visit their earlier works. The music on Necrohymns possesses the maturity and steady handed competency you would come to expect from a band that has been officially releasing music since 1988. Another win for Transcending Obscurity Records, Necrohymns has earned my support.