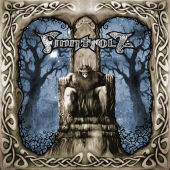 The hybridization of metal with other genres tends to offer more problems than enjoyable end results. Someone might just start a Rhumba metal band, just because, "No one's done it yet, dude!" This done without thinking that there just might be good reason as to why it's been avoided so far – there are hordes of wanky, folk metal bands that think they're so butt-reamin' unique because they have an Illyrian harp player or something, but it still comes out as twenty-sided, dice-rollin’ geekery….

Anyway, Finntroll deserve kudos with Nattfodd, for not only avoiding the fall into the genre hybridization pitfalls their less bright contemporaries didn't see, but also for taking on such an utterly bizarre choice to partner with metal, making it work and making it a damn enjoyable listen. As with past albums, Finntroll take death metal and mix it with Finnish Humpa music, which is not unlike the Polka.

Death metal and Polka? That’s either an idea born of insanity or a lot of booze. I prefer to think of it as a brilliant marriage of the two, as that is precisely what comes out in Nattfodd. Especially on tracks like, “Elityres,” “Trollhammeren” and “Ursvamp,” Finntroll pull out frenetic, razor sharp riffs that suddenly become interspersed with a freaky Polka sound. You will bop your head to this, you will love it and hate yourself at the same time. The production is significantly crisper than it was on their previous album, Jatkens Tid, and this brings out the band’s compatibility of musical styles even more. The Humpa elements are much more refined and pronounced than in Jatkens Tid as well, playing an integral role alongside the death metal elements. Before, it tended to stay at a more moderate level. This is the album that In Extremo wishes they could do.

Of course, the idea of a death metal album may chaff at the aesthetics of the true brotherhood of death metal out there, who think that the genre should have nothing even remotely resembling fun in it. But for them, I recommend listening to Nattfodd and visualizing the rampant, frenzied evisceration and feasting upon the still steaming corpses of wayward goats who happen across the bridge you live under. Nattfodd brings out the best in all of us.