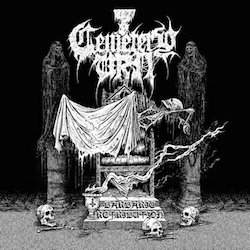 One year following the release of 2017’s self titled album, Cemetery Urn returns with their 4th full length. This undertaking was not necessary as I was quite pleased with their prior album and was not expecting to hear of another offering from the band for at least another 2 years. This being because previous album is still somewhat new to me as it has only been out for a year and 4 months. Given their inconstant gaps between album releases, I did not know when another would emerge from Cemetery Urn’s crypt. The last death metal band to have done this that I am aware of is Tomb Mold with their 2018 offering, Manor of Infinite Forms which saw the band assume a more confident and improved stance when crafting their style of death metal. With Cemetery Urn offering another album so early, it would only be right to compare it to 2017’s release that was an outstanding showcase of overall musicianship. Having said that, 2018’s gift raises the questions; in what ways do Barbaric Retribution differ from the prior entry, and more so, does the album showcase any amelioration when compared to 2017’s self titled entry? It is important that Cemetery Urn show the audience what differences the new album brings and do these changes if any, positively or negatively impact the outlook of the album and bands future within the death metal genre.

The first thing that is made immediately noticeable are the vocals. They do not sound as deep as on the previous record, in fact it sounds as though Cemetery Urn has acquired a different vocalist. And upon investigation it turned out that indeed they had used a different vocalist for the recording of Barbaric Retribution. On their prior album, Chris Volcano of the Australian black/death metal band Abominator handled the vocals, whereas on the current record, S. Geoffery assumes the role of primary vocal contributor. This change in frontmen has certainly impacted the collective sound and atmosphere being created by Cemetery Urn on Barbaric Retribution. Cemetery Urn’s vocalist on 2017’s self titled album delivered a flurry of deep charging growls, whereas on Barbaric Retribution, the vocals sound like mid toned grunts and gasps as though the album was intended to be a cross between death metal and bestial black/death metal. If such is the case, then Cemetery Urn achieved that to a considerable degree. This assumption can be reinforced, given the lower registry of the bass guitar which is common in bestial black/death metal, as opposed to the vibrant presence it served on 2017’s Cemetery Urn. The method of vocals remain constant for the first 3 songs, then there is some level of vocal variation introduced by the time you get to the closing segments of “Down the Path of the Dead”; here they boast a deep guttural enunciation vastly contrasting the mid ranged grunts and gasps. Though I have a preference to the previous vocal style, this new introduction kept the material interesting. This should have been used more throughout the album, owing to the fact that there are times in which Barbaric Retribution became repetitious.

As mentioned earlier, the bass is somewhat absent, therefore giving the lead guitars more dominance over the music; this choice in mixing hurts the audibility of the vocals but not nearly enough to ruin the album. In doing so Barbaric Retribution to the listener is heavily guitar driven. The soloing is strong, the leads are thick when layered with a dirtier sound almost old school in nature, and creates an interesting blend of traditional death metal and “war metal”. The audibility of the double bass is also reduced thus encouraging the vocals to make a strong enough presence on the record. There are instances where the drumming technique bares semblance to the “war metal“ style. This can be heard on “Manifesto Putrefactio”, “Barbaric Retribution” and “Tendrils of Defilement”. This style is briefly introduced on select tracks on the record and is even backed up by guitar time signatures that mimic the play style of some “war metal” bands. Cemetery Urn’s style was more consistent in terms of genre sound and structure whilst offering noticeable shreds of technicality. On Barbaric Retribution the approach is more candid, chaotic and furious whilst preserving the flow of contemporary underground death metal. The pacing is also slowed down at some points and even when done, the loud guitars keep the music sounding far from serene, contrary to Cemetery Urn which possessed a cleaner sound. For example on “Death Mask Preserver” which opens with a black metal-esque guitar lead and a mid paced flow, is followed up by some tremolo picking that incites an air of immediate urgency. The guitar tuning on the entirety of Barbaric Retribution mirror’s that of the early 90’s death metal bands such as Morta Skuld etc.

Barbaric Retribution was an exhausting listening experience at first due to the overwhelming guitar tone, new approach to the vocals and the added techniques of drumming and riffing. Repeated listens did not point out any hidden pieces that may have been enjoyable, instead it became a bit monotonous and tedious listening experience. This may be attributed to the fact I still am enjoying the previous effort, so this outlook may change with the progression of time. Thus being said, is it better than 2017's Cemetery Urn? No, it is in no way superior to it, however it does a good job of incorporating the black/death style of song composition. Overall Barbaric Retribution is a contrasting entry that seemed fitting for the new vocalist’s style. Its an above average entry that will take multiple listens in order to wholly appreciate. Cemetery Urn is still capable of producing great death metal I suppose, but Barbaric Retribution is not an improvement over 2017’s Cemetery Urn, instead it's the ushering of a new era in the bands musical career.