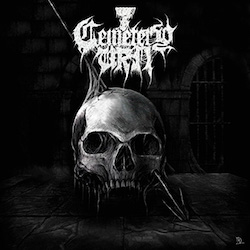 To my surprise Cemetery Gates with their 2017 self-titled release has not garnered the attention it deserves. I hold the opinion that this record is much better than the mediocre attempt by Cannibal Corpse's "Red Before Black". What this album has are the elements most death metal supporters purchase the material for. The blast beats, reckless guitar riffs, triumphant roars and pummeling double bass are all featured on this brilliant display of savagery. Cemetery Urn should have been mentioned alongside Gorephilia's "Severed Monolith". It takes the best parts of death metal and combines them in a successful attempt at creating a maelstrom of barraging musical precision missiles.

"The Deepest of Graves" successfully establishes a prominently emphasized and reinforced idea of the music to follow it. The listener is greeted by excellent songwriting compliments of the highly competent musicianship of A. Gillon (rhythm guitars and bass), Matt Maniac (Drums), D. Maccioni (lead guitars) and Chris Volcano (Vocals). "The Deepest of Graves" is a very strong opening track that features a wild but melodic blend of blast beats and a melodic flow. A touch of doom metal is also mixed into the formula and the guitar solos are diverse and memorable. The way in which the band cut's and jump's into musical variations without disrupting the flow of each song is astonishing, to say the least.

Upon arriving at "Petrified Existence" one can hear the identity factor set in almost immediately. This is where Cemetery Urn greets the listener with a thrash metal beat followed by blast beats and then a more mid-paced chugging guitar segment, which is further broken down into a doomy guitar driven section that resembles the work on Inquisition's 2016 album, "Bloodshed Across The Empyrean Altar Beyond The Celestial Zenith". Some parallels can even be made with Immolation's 2017 release "Atonement"; such as the drumming technique and the abrupt transition into a short-lived melodic territory. At the 3:09 mark of "Dredge The Pit of Burial" we hear some melodic thrashing which is followed shortly after by some throbbing gravity blasts'. It was quite a welcoming shock, as I am more accustomed to hearing such madness on brutal technical death metal albums; eg, Origin's "Accident and Error" off their 2017 release, Unparalleled Universe.

The final track titled, "A Hex Upon Elitist Dynasties". is an astonishing mix of tantalizing technical guitar soloing, black metal tremolo picking, thrash metal drumming fused with blast beats and a little breakdown just so the listener can catch his/her breath. Then soon after, the guitar solo arises once again to take you on your last rollercoaster spin.

This 40-minute venture has encouraged me to give it multiple spins and strangely enough, with every instance of replaying the record, I discover something novel. I'm glad I kept my money and held off from purchasing "Red Before Black" by the McDonalds of death metal being Cannibal Corpse. Cemetery Urn has released a very underrated album that more death metal enthusiasts should be endorsing.