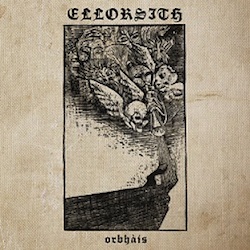 There has been many a whisper surrounding Ellorsith since the release of their debut ep 1959; in which gave a musical account of The Dyatlov Pass incident involving 9 ski hikers who passed away mysteriously between the 1st and 2nd of February, 1959 in the northern Ural Mountains of what was at that time the Soviet Union. With that release, Ellorsith shot themselves through the stratosphere of black/death metal. Since then, a keen eye has been vigilant for more conceptual, musical mysticism by them. Some may think that once a concept has been decided upon, the music should easily follow and fall into place; I disagree. I believe a concept album is perhaps the most difficult to undertake as there is much room for error. The task of conveying the presence of imminent danger, hopelessness, panic and otherworldly fright in one cohesive body of work is not easy. Also to make the listener develop a sense of empathy for the individuals/individual involved in the story is a separate and much more difficult undertaking, which relies solely on how well the band can handle the aforementioned.

The story of Netta Fornario is eerie and unforgettable once hearing of it. Apparently, she departed London during the summer of 1929 to the island of Iona, in which she encountered much trouble (beyond logical comprehension). As a practitioner of the occult, she endeavored to make telepathic contact with the spirits who dwelled on the island of Iona. Then came the frightening enigmatic events following the utilization of her occult knowledge.

"Circumambulation" begins with a ritualistic, dungeon gut, echoing, cult-like chanting. Ellorsith waste no time in preparing the climate to supplement the dark trek ahead. The blast beat following the uncanny incantation, rushes startlingly from nowhere, like someone being chased through the forest in the blackness of night by some foul spirit. "Circumambulation" has a catchy ring to the tune throughout each section of its 5:56 trance-like guitar work. Heed the word "trance". Here, Ellorsith uses semi-structured black metal landscapes and soaring rhythmic riffs to emphasize Netta Fornario's various mental states during the expansion of her pineal gland/third eye in an attempt to contact the spirits of the island; (an attempt that would constitute fatal results).

“Psychic-Self Defence” sees Ellorsith demonstrate more bestiality in their musical structure. They take a short break from the blackened death metal form of drumming and shift the course of the journey to war metal. Rightfully so, as it is with this track Ellorsith portrays Netta’s tale of battling the supposedly evil psychological forces she had made contact with by means of telepathic concentration. The drumming here tells of an onslaught by a vicious spiritual army, versus the mentally skilled but dangerously outnumbered and physically disadvantaged state of Netta. The listener is bombarded with a sense of Netta’s progressive metaphysical exhaustion and deterioration as she trades punches in her attempt to repel the restless crusade of psychic attacks by unknown entities. The guitar work on “Psychic Self-Defence” accurately demonstrates and plays along to Netta’s disoriented and collapsing supernormal psyche. The riffs are semi-dynamic on this track (and throughout the album), they alter in structure but remain attached to the primary rhythmic idea of Netta's mental and bodily erosion, whilst fragmenting itself into catchy breakdowns and euphoric landscapes.

"Exposure To The Elements" shows the listener the results of the psychic attack inflicted upon Netta. It carries a triumphant and warning sound as though it wishes to convey the message that the spirits had rejoiced in a reprimanding fashion after conquering Netta's fortification. The tempo throughout the song is moderate and appealing (as such is every song on Orbhàis). From the 3:51 mark the listener is greeted with a persistent buzzsaw guitar melody, fast one-dimensional (in a good way) black metal blasts' which arouses an atmosphere of grief and disbelief that Netta's journey had ended so quickly and tragically.

The production of Orbhàis is clean enough to hear every aspect of the music. The drumming, vocal work, and guitars give each other enough time to shine and strike the listener in such a way, that he/she has no alternative but to sit in paralytic awe and experience first hand this exposure to excellence.

What Ellorsith has done exceedingly well, is take a concept, appoint it to their brand of black/death metal and let the theory take precedence, thus resulting in an imbuing bond of music, mysticism and malign. It is here that many bands fail due to the music being vastly asymmetrical to the narrative. The outlining factor of the final fruit should not be the Idea, rather; it should be the execution and presentation of the idea.