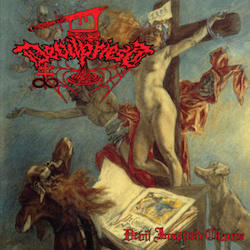 The ability to play fast, catchy and more so, competently technical, are all individual hurdles for many bands. However; the ability to put on an exhibition demonstrating all of the aforementioned qualities in one debut body of work (note the term "debut"), is a completely new breed of a venture. Can a specific genre of music have unorthodox/untraditional elements added to its successful schematic without disrupting the essence of its identity? Yes, but only if handled with care. An album of this magnitude and magnificence could not have been crafted in a sparing amount of time, no way! What Devilpriest has presented will be permanently engraved in the metal sky.

Catchiness, melody and technicality are not words or terms associated with black/death metal, in fact; they have for the most part been foreign to the genre's bizarre structure. So here is the question; would the incorporation of these elements prove to be a "fly in the ointment" or would the outcome be favorable?

Devil Inspired Chants is an offering that strikes certain parts of the nerves which invoke bliss and enjoyment. Fragmented guitars and drumming channel the technicality with caution as to not overlap the black/death border. The black/death feeling is constantly reinforced throughout the length of the album by utilizing Tom Hermies' vocals which sound like a branch between death metal growls and a sharp nasty snort. With much emphasis being placed on technical drum work; Devilpriest do a good job of utilizing melody to follow the outrageous riff rage; some examples of this can be heard on the tracks "Withstand The Holy Ghost", "Awaken In The Presence Of Satan" and "Upon The Blasting Winds". Speaking of "Upon The Blasting Winds", fans of early Slayer material will enjoy the surprise on this track, in which acknowledgment and praise are given.

One undeniable fact about Devil Inspired Chants happens to be that each track has its own identity and never displays any filler or begins to drag along aimlessly. Each composition displays purposeful instrumentation, flow, melody, diverse technical segments, traditional black metal tremolo riffing when needed and remains steadfast on the black/death metal path. The almost surgical precision of Necro Docre's drumming combined with the heedful guitars of Durtal Tot and Tom Hermies, ensures the listener that he/she is witnessing a professional flaunt. With Necro Docre and Durtal Tot being members of Anima Damnata, the musical intimacy and relationship is high on the album. This creates a brotherly like bond that further reinforces the musical strength apart from their impressive playing.

Whoever handled the production of this record is a genius. Given the task of capturing technicality and melody while maintaining that raw black/death metal feeling, the mixing and mastering would need to be "on point". It was undertaken such that one can hear the technical chaos, the beautiful melodies, and the crude nature of the album simultaneously. The artwork is glorious in depicting its theme/concept, and from listening to the record one can envision the events following the final scene of the album cover.