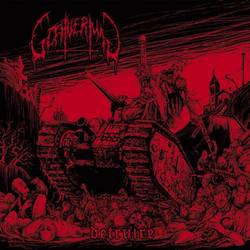 I was made aware of Goatvermin by means of a Youtube recommendation one late evening. Upon my introduction, I decided to give their material my attention on Bandcamp. Immediately after hearing the first song (Reek of Massgrave) on the album, my wallet felt a bit lighter.

What is it about this black metal act that sets them apart from other French acts within the genre? Relentless hostility! Goatvermin refuses to compromise on this monstrosity of an offering. Every song is structured in such a way that it takes him/her along for a violent ride through the fields of genocide. The opening track gives the listener a heads up as to what is to be expected from the band. By the time you get to "Gibier humain" you realize you have been banging your head consistently for no less than 14 minutes. The nasty yells and guttural barks combined with the thrash and death metal hybrid of drumming creates a unique structure of song composition especially given the fact the band is identified as being black metal. That being said, I get a more black/death feel with Détruire than a standard/raw black metal feeling. The guitars are a bit down toned but still audible enough for the listener to make out the riffs being pelted out. There are some parts of the drumming which reminds me of "Dechristianize" by Vital Remains. The way in which it is implemented truly creates a warlike feeling of high powered automatic weaponry being fired at targets. The production on the album is decent however, I would have liked it to be a bit rawer considering the album sounds more like something you would hear from Revenge (CAN). The album closes with a slower track but still rides the on hostility built throughout the previous tracks. For its short length of just under 30 minutes, it does precisely what it was intended to do, destroy!

Détruire is a solid entry by Goatvermin which credibly illustrates the genocidal ideology through this musical carnage. I am impressed with what I have heard and will continue to support this band throughout the lifespan of their musical offerings. I am interested in what the band has next to offer black metal and I hope they are able to top Détruire with their follow up release if any such blasphemy is being planned.