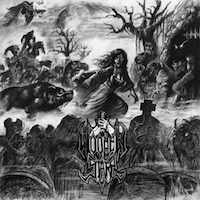 Wooden Stake has been active in the underground metal scene since 2010. They released 2 EPs and contributed to two splits involving Druid Lord and Blizaro respectively. They are still a fairly young band but their approach to doom/death metal is one that I appreciate. Dungeon Prayers and Tombyard Serenades is not without flaws; but one can hear the burning potential of the band.

Dungeon Prayers and Tombyard Serenades begins with a poetic song "Cadaverum Caecorum Liber" in which lyrics are spoken calmly and seductively. Then comes my favorite and perhaps the best track on the album "Salem 1692" which deals with the Inquisition. It possesses a very folky guitar structure and sound; it is also here that black metal vocals and psychedelic guitar tones announce their presence. The doom metal aspect is not absent at all, the snail-like section of the song hits, but at a very late period. The catchy guitars on the track hit before and after the doomy emphasis.

There are many rhythmic shifts throughout the album in an attempt to keep things interesting for this 45-minute journey. It is with this the problems begin to emerge. This album is filled with moments that build in melody and bluff just when you are expecting the climax. Wooden Stake does this by shifting the rhythm frequently. With this decision, they manage to keep each track diverse but within the diversity; melody, purpose and eventually interest are lost as a result of not being able to end the songs appropriately and in a timely fashion. Some songs sound like they are begging to cross the finish line but only end up dragging throughout the course of its length. it doesn't help the matter especially when the vocalist is singing extensively thus impeding the music, such as on the track "Six Feet Of Earth...And All That It Contains". Some songs such as "Skull Coven" and "Tortured Into Eternal Repose" feel like filler through and through, whilst searching for direction. They place a wet blanket over the solid start gifted by the first 2 tracks. However to my surprise the last two tracks brought out the potential of Wooden Stake. More notably the final track "Bleeding Coffin" which has a steady melodic flow and smooth transitions into doomy sections which are levitated along the path by timely and proficient guitar work. With this song, they achieve what I think they were aiming for from the onset; diversity, rhythm, flow, and memorability. Even though it is 8 minutes in length, "Bleeding Coffin" eliminates the existence of time from the listener's subconscious. Had the prior tracks been constructed in this manner the album would have had a much higher rating.

There were instances in which I felt discouraged to listen to the album thoroughly; however, I am glad that I did. Had I failed to do so I would have missed out on the grandeur of the closing moments on Dungeon Prayers and Tombyard Serenades. I enjoy the psychedelic aspect of the music, the black metal-esque vocals, the clean vocals, the rock and roll along with the catchy folk-inspired guitars. Should Wooden Stake make necessary alterations to their formula; the music they make would be blissful.