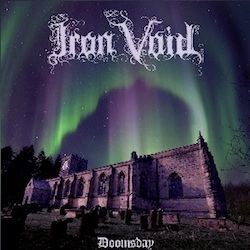 As much as underdogs might be romanticized in modern literature and film, no one really vouches for true doom metal a whole lot, except me, I guess, because I'm one of the few who sees it as the most fundamental representation of heavy metal. Doom and gloom in heavy rock music predates NWOBHM/Iron Maiden type melodies even though we think of the latter when discussing "trad metal", but that's a whole 'nother story. The point here is that England's Iron Void lays down doom as the epitome of the style, never abandoning the grit that's kept it going through relative obscurity for so long. These guys really are like the modern day stronghold (they're not new by the way, Sealey formed the band 20 odd years ago) for this niche, feeling quite inspired, yet palpably comparable to most classic doom bands. These guys are inspired and heartfelt in their songwriting, as in, 2015's Doomsday is like the best metal album of the 2010's that isn't modern OSDM. Forget people overlooking true doom in favor of listless funeral and stoner doom. This album blows even Crypt Sermon out of the water. Iron Void are doom metalllers who play doom well because they're doom metallers, not guys in the metal scene who one day decided to play doom well. The latter's always welcome, but the former doesn't happen a whole lot because who's really a true doom metaller nowadays? People don't know I exist, their company is never missed.

Holy fuck, Doomsday goes for the throat with these bangers. It's structured a bit like "Born Too Late" with a slug of a doom metal title track opening things up, but 'Path To Self Destruction' is somehow even more emotionally powerful. That driving mid-tempo riff, it's doom with legs alright. It's the type of thing where the influences are abundantly clear but it's done so well that you can't pinpoint a specific artist to draw a main comparison to. Black Sabbath, Saint Vitus, Pentagram, The Obsessed, and Iron Man are the main ones, but Iron Void is a clear lovechild of all, while also being comparable to their contemporaries in The Gates Of Slumber, Cardinals Folly, and Lord Vicar. 'Gates Of Hell' is like Void's answer to Iron Man's "The Fury", but a bit more NWOBHM influenced in the sense that it wouldn't be out of place on an Angel Witch record with the gallops leading up to the verse riffs. 'Lost Faith' is another doom metal-knuckle sandwich, the melodies of which largely inspired a song by my band called "Nemesis", while 'Eye For An Eye' has a riff that will cut through all the bullshit in your life. What makes this record so addictingly good is not necessarily how it's structured, because none of the songs, regardless of tempo, ever feel tiring on their own. This is because they're not cookie-cutter compositions in the slightest, as each song here is uniquely crafted with a focus on authenticity.

We have to discuss another point and that is how the whole band shines. I think bassist Sealey does vocals on some tracks while guitarist Steve handles singing duties on others, but in both cases the vocals feel suited to the mood of every song, and every song has a distinct mood because the songwriting ideas are quite coherent. The title track and closer 'Upon The Mountain' feel quite doomy enough with their refrains to blow Reverend Bizarre out of the water, helped by the fact that Void likes to make you bang your head to some ballsy UK doom as well. The guitar tone here is also the bottomy, bass-heavy, crunchy tone you want out of Hellhound Records-like doom, but what's interesting is that Sealey told me they used a drop tuning rather than D or C# standard like many traditional doom bands do. The result is a vintage guitar sound that still isn't like anything else you've heard. Also, you'd be a novice to think Sealey's bass is inaudible in the mix, because it's there alright, but it's married to the guitar in a vat of fuzzy distortion. Drums, meanwhile, feel involved in the execution of the songs rather than like a supporting element, in much the same way Joe Hasslevander's drumming was on the classic Pentagram albums. This lends the entire band's sound a very heartfelt feeling that I mentioned earlier.

Traditional doom is sadly an overlooked niche in the metal world, but make no mistake, it is still going strong if you know where to look. This stuff has a humane feel to it, it's relatable and that makes it feel even heavier. The take home point is, Iron Void is a band you need in your life, and Doomsday is essential doom metal. Listen to it, feel it, and as they always tell me, DOOM ON!