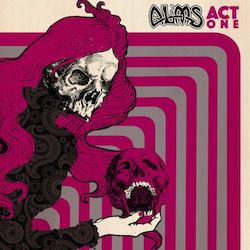 I'm happy to have found a heavy/doom metal band that can share the same space as Cauchemar and Occultation. I've skimmed through numerous bands within this genre in search of something that is enjoyable and doesn’t need to rely on image in order to acquire attention. Act One is Alm’s debut album and what does it do so well to have my props bestowed upon it? Generally speaking it contains the rudiments of a memorable doom metal album whilst drawing inspiration from 70’s psychedelic rock music. Its 6 songs of sweet seductions that sweep seamlessly along the surface of serenity. This is the kind of music I can enjoy and relax to whenever I just want to engage in deep thoughts as I analyze the ever mysterious mechanics of the multiverse.

“Dead Water” is a suitable opener; it qualifies as one of those getting to know the band types of songs. Consider it an introduction to the ideas and methodology being used to blazon Alms music. It’s the longest track on Act One, its the recipe responsible for contriving this tour de force which has sent Bandcamp in a buzzing frenzy. Hear the keyboard being played, hear the guitars coat the doom, hear the male and female vocals that operate off each other’s energy; but most of all, note the way the ending of the track attaches itself to the beginning of the following being “The Toll”. The feeling of integration is present on every song leading into the other until the final note is played and the last lyric sung. I love the name assigned to that track and more so the music fits the title. It has that dragging sound that encompasses the vibe a burdensome fee would entail. Note “The Offering”, an absolutely intelligently composed piece, as such is the case with all tracks on Act One; it calls for meditation, an unbroken gaze of concentration in order to engage and participate in the visions being shared. Unbridled is the aura, its energy laced with twin guitar leads and solo licks lashing lividly at enthused listeners. Alms are a hungry band, they want the top spot,”The Offering” may be the piece that erects the band to a level that is worth serious attention. It’s the constant waves of melody that hover over the listener and drowns him/her. It’s the type of song that intensifies the thirst for doom metal, the type that gives a band a significant advantage over all others, a threatening blow that keeps all on alert during the storm in expectation of a final session of unadulterated musical esotericism.

As strong as Act One opens, such is the way it closes. “Deuces Low” and “Hollowed” are more rock and roll oriented, the stain of doom still resides but is toned down a bit especially on “Deuces Low”. The guitar solo towards the end is the highlight that gives you that late 70’s feeling. It leads you into the final cloud of obscurity in this journey being “Hollowed”, with its organ driven opening start and dual verse melody. The drumming is fantastic, it displays at many times a sudden transition in rhythm and its ability to keep in accordance with the guitar flow on all 6 songs. However I feel as though the tone of the drum kit could have benefited from a slightly beefier sound. The mix is lacking on the snare that sounds a bit thin, however it doesn’t negatively impact the music in any way. The thing about this genre is that some bands don’t really know how much is enough and end up creating a 50+ minute album that had strong musicianship at the beginning and empty recordings towards the ending. Songs that don't feel as though they belong on the record or even add to the panorama of the project is usually the downfall of most metal albums in this genre (personally speaking). Alms avoids this by keeping Act One short and highly memorable given the hum worthy notes of the choruses and the head bobbing guitar work. For a band that has just revealed itself in the form of a full length record that is a treat for doom metal lovers, only greater things should be expected to come from them in the future. Act One is dark but It sounds as though they held back a bit, thus being said, the potential for more iniquitous album does exist.