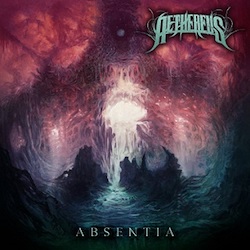 Type: Full-Length
Release Date: August 10th, 2018
Label: The Artisan Era
Genre: Death, Technical
1 Cascades Of Light
2 Writhe
3 Mortal Abrogation
4 Fluorescent Halls Of Decay
5 Absentia
6 That Which Is Left Behind
7 The Black Circle
8 With You, I Walk
9 The Pale Beast
MetalBite on YouTube

Isn't it always so disappointing, yet also kind of exciting when you see an album you absolutely love have 0 reviews on the archives? On one hand it's like, "wow, nobody really gave enough of a shit to review this one yet?" But on the other hand, you think to yourself, "I guess I get first dibs on the review to tell everyone how great it is!" That's how I feel just about now with the debut album by Washington tech death band, Aethereus. I'm sure a lot of tech fans have heard of Aethereus, due to them being signed to The Artisan Era, home of a lot of the most popular tech death bands that have sprouted out in recent years. Even still, Aethereus doesn't get the recognition bands like Equipoise and Symbolik do, and that's not fair; I would argue "Absentia" is better than the debuts by those two bands.

"Absentia" is an extremely odd mix of sounds. The influences from bands like First Fragment, Obscura, and Inferi is undeniable; but there's also an extremely heavy sense of dissonant tech death such as Gorguts and Ulcerate. Between all the beautiful melodies is crushing heaviness and menacing riffs that evoke a sense of fear and urgency. I think the production value does most of the work with this. It's bass heavy and the riffs sound jumbled and frantic, buried in a layer of dissonance as the music beats you with both sides of the extreme at random times. A song like "Fluorescent Halls of Decay" brings this to light the most. It starts off like one would expect a Gorguts song to start if it were just a little more modern. The slow menacing groove and the eerie melodies that compliment it is heavily reminiscent of the more fear-driven experimental tech death. Whereas, in contrast, the song that follows, "Absentia," sounds like something Beyond Creation would do. It's bouncy, melodic and filled with a lot of awesome lead work that keeps you coming back for more.

This seems like a pretty schizophrenic combination of sounds, but it actually kind of works. Although it's pretty jarring at first and perhaps off putting, a couple of listens in, their formula starts to make sense. It almost creates a story, balancing their sound between the chaotic and the beautiful. When it's chaotic, it's riff heavy, the vocals are low and destructive and the drumming is just pure brute, dragging the listener to a tunnel of horrors. The light at the end of the tunnel are the more melodic parts, also featured on a song like "That Which is Left Behind." The way I describe the sound of the band is if Inferi's "Revenant" and Sunless' "Urraca" had a demented child that was straddled between two different worlds.

Musicianship on this record, as one could expect, is excellent. Everybody plays their part and no one is left out as a background instrument. The bass, drums and guitars all have their time to shine in different sections of different songs. It's not too showboaty thankfully, so don't expect some Archspire-like acrobatics where everyone is going as fast as possible. They slow down for crushing grooves and well thought out breaks, which is refreshing when you consider a lot of tech death bands just want to show you how good they are at playing music rather than writing music. The vocals aren't the greatest thing to happen in death metal, but, as always, they aren't a detriment and get the job done. Good lows, good highs, nothing great beyond that.

This album has been really hard for me to grasp and even harder for me to describe accurately. In theory, there's a lot of bands that are just like it, but, in the same breath, there isn't really anything that sounds similar to it, at least not something I've heard. It truly is the two worlds of technical death metal combined into one and the juxtaposition of sounds is truly creative. I've been listening to it on and off for a few years now and only now have I felt like I can actually tackle this album and even still, you just have to listen to it to understand where I'm coming from. It's fucking brutal, man. Heavy, dissonant, and somehow beautiful and melodic. I think of all the bands that have yet to release their sophomore album, Aethereus is the most interesting. Where do they go from here? Give in completely to one side and abandon the other or continue to tightrope the thin line between until they completely discover their own sound? I guess only time will tell. Keep an eye out for this band in the future. They're onto something.