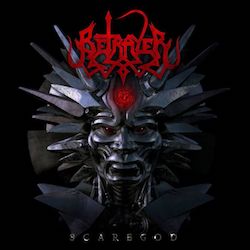 Six years after returning to the stage, Betrayer presents the new album Scaregod. An album better than its predecessor in every aspect.

Released in 2015, Infernum in Terra did not fully confirm the sense of resurrection of Betrayer after 17 years of non-existence. The cult status of the debut album Calamity from 1994 did not give a sufficiently large advantage in pushing through the crowd of bands, which have since tried to plow albeit fertile, but exceptionally mono-cultural death metal plot. Not much help particularly came also from lacking spark and quite average Infernum in Terra, which definitely required refinement in terms of composition and sound. Its successor, Scaregod, is a slightly a different story. The disc is stronger, more massive, definitely sounds better and draws from the classics of the genre in a successful way.

The latter is not however any objection in style, in which creative cannibalism has dominated for years, and the crushing majority of albums vary only in details. In the stylistics, which is still doing well nonetheless, because you do not have to reinvent the wheel to propose something really decent and worth knowing. This is known to both giants and veterans of the genre, many of whom work very well clinging to the tried patents, as well as lesser-known bands slowly working on their brand. That's the case with Scaregod. The disc does not claim to revolutionize the death metal scene, and Betrayer does what they do best – they’re pounding it in nicely and more interesting than the previous time.

Already promoting the album, opening the material "We Are Rebels" beyond the band's specific statement ("We are rebels, in the rise against the light") announces almost everything that can be expected from the latest incarnation of the band. Accelerations (but without crazy tempos), massive slowdowns, where producers input of Malta is best heard, some technical licks (but no exaggeration, Betrayer is closer to Deicide than to Gorguts) and swinging  groove, perfectly embedded in compositions, unforced solos, emphasized here and there and well-working rhythm section, finally the first league growling of Berial. Assemble these blocks together and you will get a solid structure under the banner of Scaregod. The fact that you had to deal with such blocks many times before should hardly spoil the joy of fun.

The disc is not overly aggressive and definitely does not wear you out with the intensity or density of the pieces. The Koszalin trio has not forgotten about space in compositions and prefers to simplify patterns rather than to wander into an excessive jumble of sounds. In this case, it came out for good. Personally, I miss a bit of old school variations, such as in "Ashes of the Vatican" (distant echoes of "Chapel of Ghouls" by Morbid Angel), which perfectly adapts into the concept of the band. What if Betrayer were a bit bolder reaching after similar solutions? Anyway, Scaregod is a good material and it's worth giving it a chance.