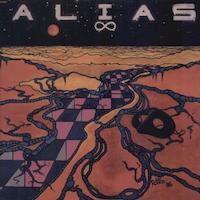 Type: Full-Length
Release Date: 1987
Label: Grudge Records
Genre: Power
1 (You Can't) Take My Youth Away
2 Authority
3 Prisoner Of Dreams
4 Take The Light
5 Knight Of The Realm
6 The System
7 King Of The New Order
8 Listen To The Rain
9 So You're A Star
10 Emerald Eyes

At first glance, I thought this was a reissue of a Canadian hard rock/hair metal supergroup act from the early 1990's... but I was wrong. This actually is a power metal band from Florida that was out in 1987, that has the bad luck of having the same name. I hated the Canadian band due to the commercial cheesiness it delivered, hopefully this Alias will be better for me.

Coming out of Sarasota FL, Alias formed from another band 'Blitz' around 1987 and began doing the stylings of early United States power metal. This quartet reminds me of many USPM acts from this early stage (Fifth Angel, Leatherwolf) … still having major ties to melodic traditional metal in the process.

The album comes across as it is, early power metal. Good musicianship and vocal performances are present, but what keeps it down is the recording. Sounding thin and without body, the whole album sounds weak, not full and almost operatic as 99% of power metal does. I have heard fuller recordings of band practices on a very old Iphones. What ever 'power' this power metal band had was missing in the weakness of the recording processes. The decent sounds were basically handicapped here to the point of stupidity.

There the story is… a fairly good yet average still PM band plus bad recording equals a album very hard to listen to that causes an typical band to fall through the cracks. Don't know if the recording could have helped, but it could not have hurt either.  The rating I give is what I could have gleaned… sad, is it not.